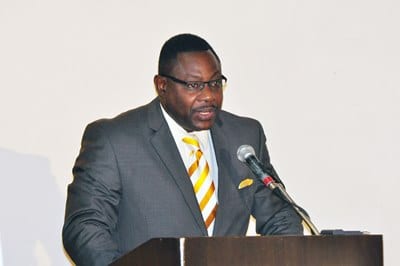 Barbados is serious about the commitments it has undertaken at the international level, says this island’s Acting Minister of Foreign Affairs and Foreign Trade, Steven Blackett.

According to Mr. Blackett, the country has made a concerted effort to ensure that it could live up to those obligations by focusing on improving their implementation at the national level.

“Our goal is to build a just, equitable, resilient society supported by a sustainable green economy,” he stated.

He made the comments last evening at United Nations (UN) House, while delivering remarks at the launch of the UN Day Exhibition, which captures in visual form the development of the relationship between Barbados and the United Nations over the years. The exhibition also coincides with Barbados’ 50th Anniversary of Independence celebrations.

This country was admitted to membership of the UN on December 9, 1966, shortly after attaining independence on November 30, 1966.

The Minister noted that Barbados had benefited from its membership of the UN and had also made a significant contribution to the work of that organisation.

He pointed out that Barbados had hosted the first UN Conference on the Sustainable Development of Small Island Developing States (SIDS) in 1994.

“That conference was a major accomplishment and is an example of the significant contribution that small states such as Barbados can make to large organisations like the UN,” he remarked.

Mr. Blackett said the international community was currently facing myriad challenges and Barbados, as a Small Island Developing State, was particularly vulnerable to those global tests. He stressed, however, that the UN had been at the forefront of efforts to address those challenges.

He noted that over the years, Barbados had actively engaged with other UN member states and important stakeholders at a number of major high level conferences.

He explained that the result had been the creation of an international infrastructure consisting of instruments such as the SAMOA Pathway, the 2030 Development Agenda for Sustainable Development and the Paris Agreement.

He stressed that Barbados was one of the first UN member states to sign and ratify the Paris Agreement when it was opened for signature in April 2016.

He added that this country also signed and ratified the Arms Trade Treaty in time to participate in the First Meeting of States Parties in August 2015.

A number of primary and secondary school children are expected to tour the exhibition which ends on Saturday, December 10.