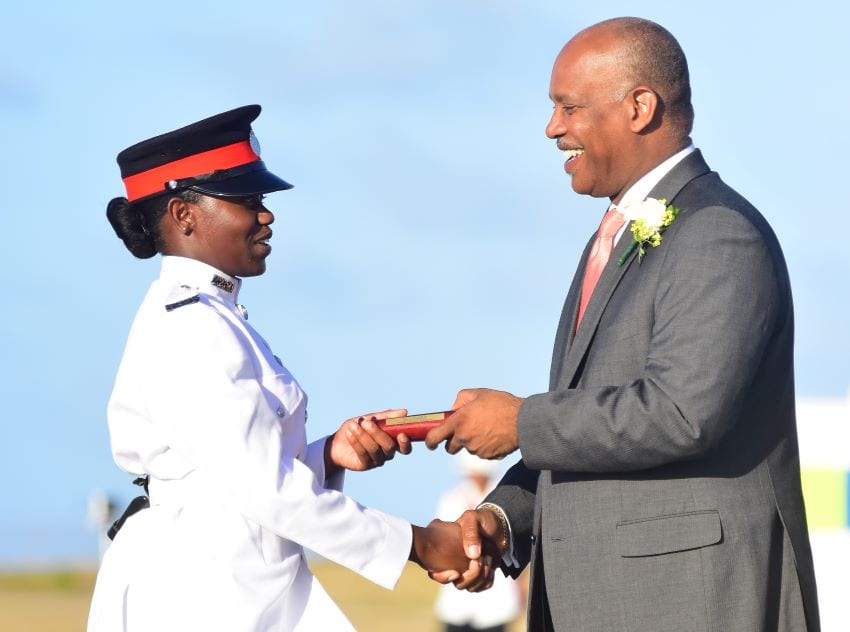 After capturing the lion’s share of prizes at the 143rd Passing Out Parade at the Regional Police Training Centre (RPTC), Police Constable Dale-Lan Wilkinson is encouraging other young people to consider a career in policing.

The 21-year-old was named Best Recruit, and captured the coveted Baton of Honour, during the ceremony at the RPTC’s Seawell, Christ Church training ground on Wednesday.

In addition, she was awarded the Commandant’s Trophy, and named the Most Outstanding Student; the Student with the Highest Aggregate; Best at Police Duty Subjects; Best at Officers’ Safety Training and First Aid; Best at Multi-Disciplined Subjects and Best at Physical Training (Female).

“I believe that young people should look at the Royal Barbados Police Force as an option because there are so many people unemployed,” she said, noting that it was an experience that one had to have for themselves.

Ms. Wilkinson said joining the force had its benefits, including the ability to achieve an Associate Degree in the Applied Science of Policing.  In the long term, there are opportunities for gratuity, pension and also the ability to do future studies. “So, I don’t see why any young person would not be interested,” she indicated.

But, the Best Recruit admitted that her journey to the top was not an easy one. “The first two weeks were the most challenging, but it has been a very developmental process, especially as a young woman,” she said.

She explained that the challenging part at the start of her six-month stay at the RPTC had to do with the difference in routine from “everyday life”.  “You have physical training, then you have fatigues, [and] you have classes from 7:15 a.m. to 5:30 p.m., and all are structured differently.

“It is really taxing, so it is up to the individuals to get what they want out of it.  It was challenging, but I overcame them,” she said.

She added that the latter half of the course brought back memories from being a cadet, and she was able to build relationships with others.

Ms. Wilkinson noted that the training enabled her to learn a lot about law enforcement, and what was really going on in Barbados.  She added that she now had the ability to help others fight crime, and was looking forward to her career in the Royal Barbados Police Force.

Police Constable Jarad Hepburn is also encouraging others to join the rank and file of the RBPF.  “It is a great opportunity, and I would encourage anyone who is up to the task and is willing to give it a try to join because it comes with benefits and opportunities and it takes you places,” he said.

However, he said the change from civilian life to policing was a journey which saw him changing how he carried himself, spoke, and the things he did.