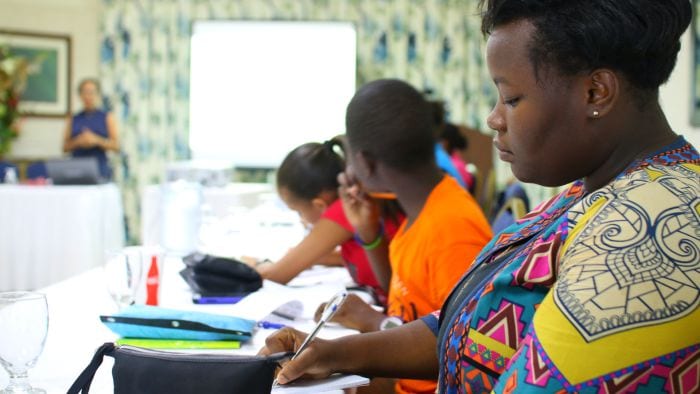 The workshop, which was held at Almond Bay Caterers, was conducted by Behaviour Change Communication Specialist, Alexis Nurse.  Her discussion centred on the facts surrounding HIV transmission, the influence of popular culture on behaviour and abstinence among teens. The group was first given insight into the transmission, testing and symptoms associated with HIV.

“Girls are more vulnerable to HIV than boys because it is easier for a woman or girl to contract HIV due to how a female’s body is made and because sex takes place within the female’s body,” Ms. Nurse explained. She added that the younger the female, “the easier it is for her to contract HIV because her body is not fully developed”.

Ms. Nurse indicated that if a person living with HIV took anti-retroviral treatment consistently and correctly, that person could eventually reduce HIV within his/her system, and essentially not transmit the virus to another human. However, she stressed that for this to happen, the individual must consistently take the medication correctly.

“We want to ensure that they are armed with the facts so that they can share it with others; the ultimate aim is for the SMS Dynamic Speakers to take what they discussed today and create messages for their peers as we’ve found persons tend to listen more to those in their age groups.” 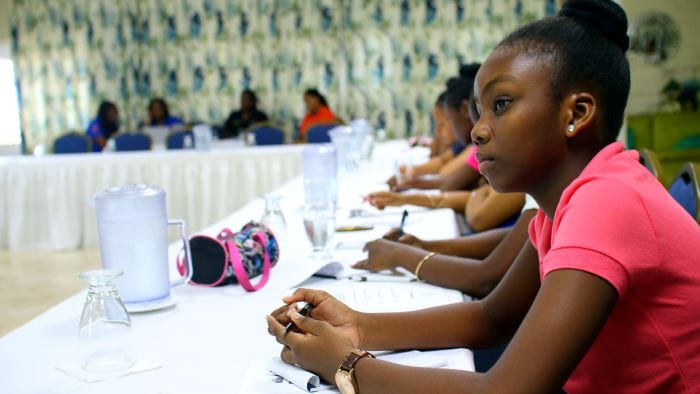 One member of the SMS Dynamic Speakers Club looks on. (J.Weekes/BGIS)

According to Ms. Pilé, it was very important to “arm the young people with the correct information” so that they could reject myths and, in turn, share the correct information with their school mates. In addition to HIV awareness, the committee’s goal was also to educate the young speakers on the influence of popular culture, specifically music, on behaviour.

“We wanted them to analyse the messages present in the music they listen to. Often times, persons sing along to songs without considering the lyrics and the meaning; our young people need to be aware of the various messages out there. The reality is this; when you hear repeated messages of a particular kind, it can impact how you think. The more we can equip them with this kind of critical thinking, the better they will be at deciding how they will respond,” she explained.

While she noted that the BGIS HIV Committee’s mandate was, in part, to educate persons about HIV and Sexually Transmitted Infections (STIs), Ms. Pilé stated that it was willing to work with any school,  youth group, or organisation interested in raising awareness surrounding HIV and other STIs. She added that the committee aimed to present the information in as engaging a format as possible.

“Over the years we’ve used radio dramas, the children’s book, Sticks and Stones, which is focused on sitgma and discrimination, and our annual charity concert Love Poetry and Song, to get the message out to a wide cross section of people.”

One teacher in charge of the SMS Dynamic Speakers Club, Alyssa Harewood, expressed her satisfaction with the workshop.  “It was a great initiative;  these sessions need to happen. [The] children were extremely engaged… [and] are so enthused about spreading the message,” she said.

Ms. Harewood added that the information shared would have been facts the students did not know or were possibly unsure about. She agreed with the benefits of starting with the school’s speakers and debaters as the students’ role made them more poised to spread the message to others.

Senior student in the speech club, Jada Hope, remarked that it was her goal to further HIV awareness among her peers. “I learned a lot, it was very helpful…I will definitely talk to my friends about the meeting,” she said,  adding that she believed that the information could also help her in debating and speaking on topics related to HIV.

Persons interested in participating in similar workshops may contact Chairperson of theBGIS HIV Committee, Lisa Bayley, at 427-4853, or email lisa.bayley@barbados.gov.bb.