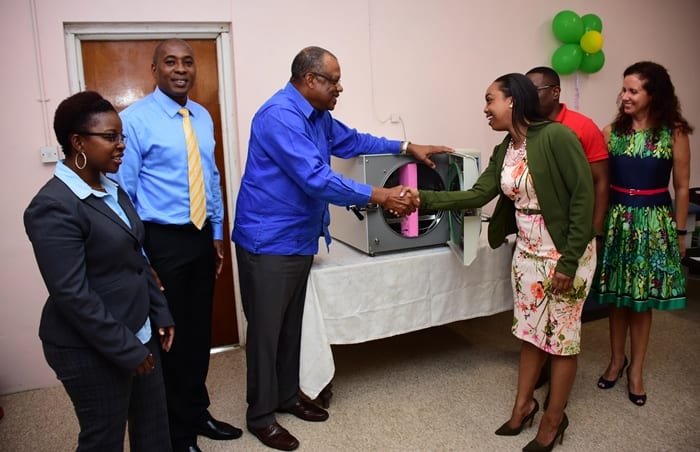 Health Minister John Boyce has praised the Barbados International Business Association (BIBA) and its partners for their continued commitment to the strengthening of the health care system in Barbados.

Speaking today at a presentation ceremony of two autoclave machines by BIBA to the Eunice Gibson Polyclinic in Warrens, Mr. Boyce disclosed that over the last five years, BIBA had donated more than BDS$350 000 in equipment and educational materials to the island’s polyclinics.

Today’s donation, valued at BDS$40 000, is part of a $168 000 commitment to the Eunice Gibson Polyclinic. The two major donors were Chancery Reinsurance Limited and Shell Western.

The Health Minister said that the new equipment would augment the Polyclinic’s  infection control programme, noting that proper sterilisation of medical devices, instruments and supplies used in the direct care of patients was a critical aspect of the primary health care delivery system.

He disclosed that other equipment which would be provided to the Polyclinic through the charity’s future fundraising efforts included Vital Signs Monitors and OB/GYN equipment and instruments. The equipment earmarked for the Polyclinic was outlined in a prospectus developed by the polyclinic and BIBA last year.

Mr. Boyce said that the healthcare system faced many challenges that revolved not only around financing, but also an aging infrastructure and the pursuit of costly advances in treatments and appropriate health technology.

There were also higher operating expenses, he added, especially associated with the treatment and prevention of non-communicable diseases and the impact of violence and road traffic accidents.

“The Government of Barbados continues, despite all the challenges, to strive to provide the highest affordable quality health care possible and guarantee universal access to health care.

“Our commitment to healthcare delivery, along with philanthropic contributions such as this one, is emerging as a significant means by which our healthcare system can enhance the availability of resources,” the Minister of Health concluded.