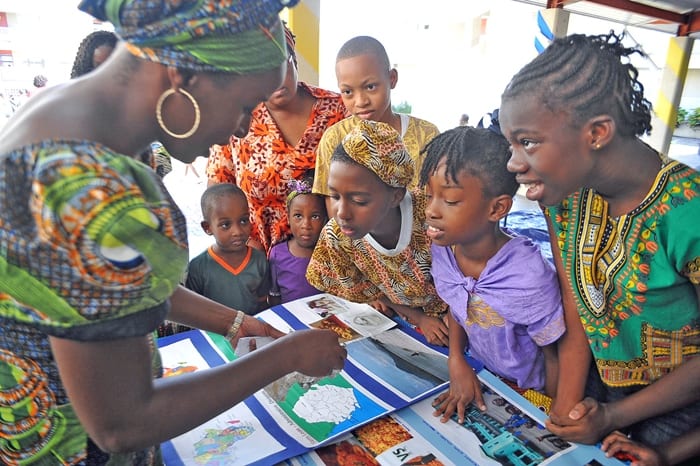 African Awareness Month kicked off today at the Blackman and Gollop Primary School with children learning how to cultivate feelings of pride towards their African ancestry.

There was drumming by six-year old Jamani Burton of Infants B; African music, songs and poetry; and an address from Estella Walcott, a parent and native of Sierra Leone on the theme: Retracing Our Steps from Africa to Barbados.

Principal of the school, located at Staple Grove, Christ Church, Petrona Holder, said the activities would continue until February 28 and every Wednesday students would be involved in different aspects, including storytelling, games and “very interactive sessions to bring over to the children their African ancestry”.

Acknowledging that the theme was appropriate because Barbados was celebrating its 50th anniversary, Ms. Holder said it was a time of reflection and reflective thinking, and the school wanted to ensure students understood the ‘’bitterness of the middle passage”.

“Our African ancestors had to be quite brave and strong to survive that experience working on the plantation and the cruelty of slavery.  And, the fact that despite all of that, we are proud of who we are. We are a proud nation, a proud race, and our children must grow up to understand that there are many traditions that their African ancestors would have brought over, particularly the rearing of children, which I think are needed today. It takes a village to raise a child and at Blackman & Gollop we try to be the village that raises that child…that they can become proud citizens of this country,” said Ms. Holder.

The Principal spoke too of the school’s efforts at integrating other races at the school, noting that some of these children also came out in African garb. “The point is the history of Barbados cannot be segmented; it is interlocked.

At some point in time, the persons who are of a different ancestry will pick out what is important to them, so therefore, we who are of African ancestry have to pick out what is symbolic for us. But we will respect and we will celebrate all of the ancestries in Barbados,” Ms. Holder declared.

Parents were commended for ensuring their children were “resplendent in their African attire” and the Principal added that those who did not wear today would have another opportunity to do so on February 28.

Guest speaker, Estella Walcott, told the children that despite their different shades and languages, they looked no different from the children of Africa and Sierra Leone.

Outlining some similarities in their culture, food, dress and the games played, she said: “The thing that unites all of us is that we all come from the same people. We are all African no matter where we are. You are African. You are beautiful people.  You are strong people and you should always remember that,” she asserted.