BNC 2016 A Learning Experience For Barbadians 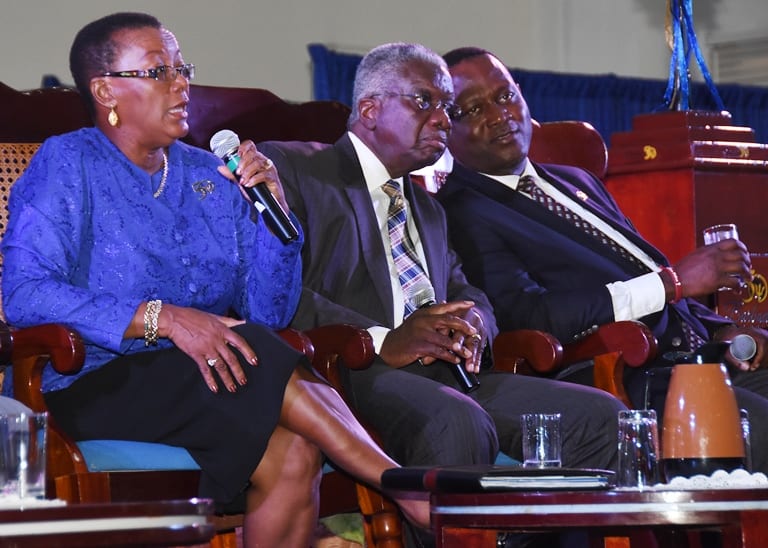 Senator Maxine McClean speaking at the interactive session with the Cabinet at BNC 2016 today at the Lloyd Erskine Sandiford Centre. To her left is Prime Minister, Freundel Stuart (middle) and Minister of Industry, Donville Inniss  (C.Pitt/BGIS)

Persons visiting this year’s Barbados Network Consultation (BNC), also known as the Diaspora Conference, will have the opportunity not only to interact with other Barbadians, but to understand how Barbados has developed over the years.

Minister of Foreign Affairs and Foreign Trade, Senator Maxine McClean, made this announcement during the opening ceremony of the BNC, which was held on Wednesday at the Lloyd Erskine Sandiford Centre.

According to her, in addition to nurturing the bond between nationals here and abroad, there would be a video presentation entitled: The Barbados We Know and Love, which would provide an introspection of what it was to be Barbadian.

The Minister added that following that presentation, participants would get an opportunity to have a discussion with Prime Minister Freundel Stuart, and other members of the Cabinet.

Senator McClean also pointed out that there would be a specific focus on genealogy in an effort to provide persons with the tools to trace their ancestry.

“In order for us to move forward, it is important for us to know who we are and where we have come from. To help us in this quest, we have included in this year’s programme a session on genealogy. It is intended to expose participants to the rudiments of tracing their family roots and history, and we expect that persons would be inspired to know who they are,” she stated.

The Minister also underlined the Youth Interactive Forum as a critical component of the three-day meeting. According to her, the sessions were specifically designed so that young persons could engage interactively among themselves and with other Barbadians working in the diaspora who have come home to share their experiences in Science, Technology, Engineering and Mathematics, as well as the arts.

The BNC will also feature a Rum Café, which will showcase rum from producers across Barbados; a Genealogy Extravaganza which will be held at the Department of Archives, Black Rock; and a film festival.