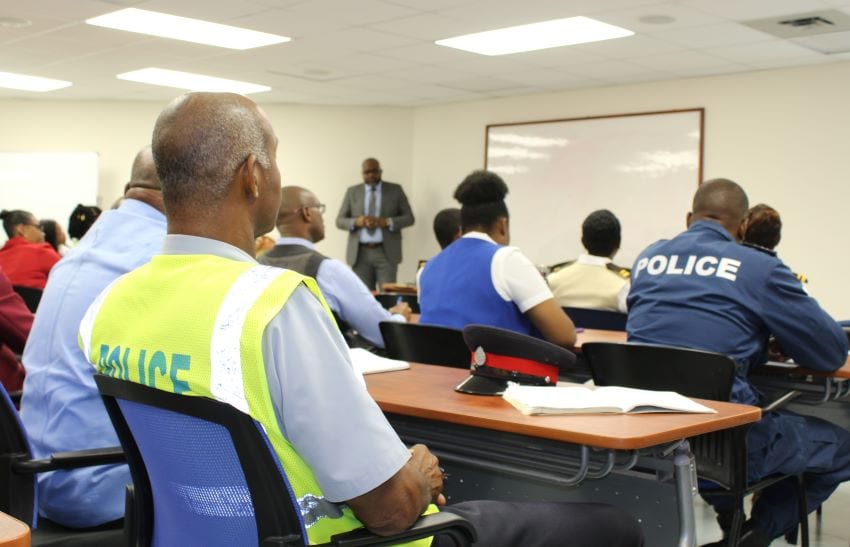 Some of the participants at the first of two one-day training workshops for border officials. Represented were the Customs and Excise Department, the Royal Barbados Police Force, staff of the Grantley Adams International Airport, airlines and other frontline staff. (A.Husbands/BGIS)

Training for border security officials must be a priority, if Barbados wants to guarantee, and continue to attain the highest standards in the maintenance of law and order in the country.

And, according to Chief Immigration Officer, Wayne Marshall, joint border security training is one way to identify common interests and threats, and develop coherent approaches to deal with them.

He made these statements on Monday, as he addressed the opening of the first of two one-day training workshops for border officials, which included representatives from the Customs and Excise Department, the Royal Barbados Police Force, staff of the Grantley Adams International Airport, airlines and other frontline staff.

The workshop was held in the Conference Room of the Grantley Adams International Airport.

“A number of wide-ranging and complex challenges have been engaging the attention of law enforcement agencies regionally.  These challenges transcend organizations, and call for collaborative approaches and interventions,” he said.

Mr. Marshall also told participants that the training would provide the foundation for improved operability between agencies, with each getting to know the mandate and function of counterpart agencies, and about the job description of employees.

He reasoned that this would allow participants to know what their agency’s contribution was to the collective security of the border.

“The training will allow for the sharing of experiences and information.  In this context, there will be a reduction in the levels of disparity in skills and knowledge which will ultimately facilitate inter-departmental collaboration on security issues,” he said.

The Chief Immigration Officer stressed that the critical issue, therefore, was devising a solution to bring about stakeholder engagement and cooperation.

He reminded those present that safety was one of Barbados’ competitive advantages, despite a recent upsurge in crime, and often distinguished the island from other CARICOM territories.

“Many visitors and investors have stated that when they get behind our borders they feel safe.  Safety in this regard is one of Barbados’ competitive advantages,” he said.

Mr. Marshall said the training, which formed part of an interdepartmental initiative developed by the Deputy Chief Immigration Officer, Margaret Inniss, would also result in the commonality of efforts and the development of synergies.

“The combined efforts of the team will be greater than if each person’s efforts were taken separately, and added,” he concluded.