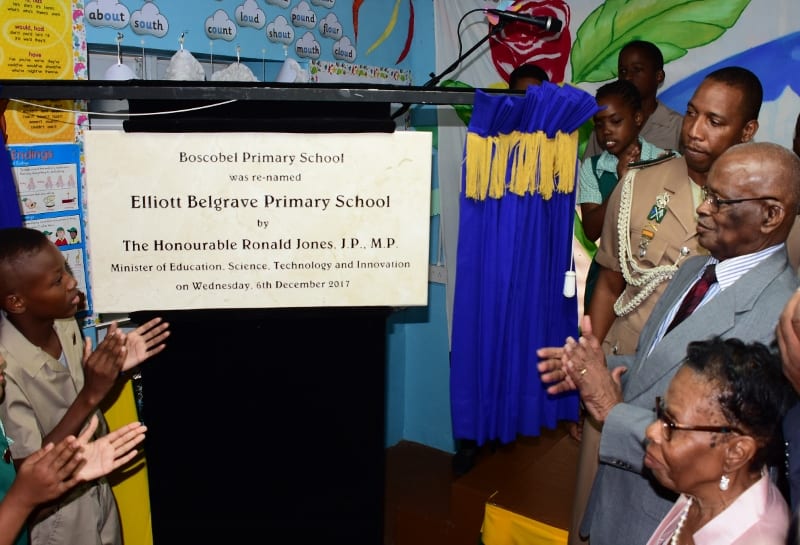 “A foretaste of heaven” and a “high honour”. That’s how former Governor General, Sir Elliott Belgrave, described the renaming of the Boscobel Primary School, at Gays, St. Peter, in his honour, on Wednesday.

The school, where he spent his formative years – at the time it was called the Boscobel Boys’ School – will now be known as the Elliott Belgrave Primary School.

In a ceremony filled with tributes about his accomplishments, as well as glimpses into his early upbringing, Sir Elliott was hailed as a humble man and a living legacy. He, who held the highest office in Barbados for three years, counted the renaming of his alma mater as one of his greatest achievements to date.

“I cannot think of a more satisfying experience than being here this morning. Let me give you three reasons why. I am back home in Boscobel, St. Peter, where my navel string is currently buried. Secondly, I am actually on the premises of the primary school where I received my early education and infant nurturing. And the third reason, is that my wife and I are surrounded by the people of Boscobel, our relative and friends and well-wishers…

“I am deeply touched by the decision of the Minister of Education, Ronald Jones; Prime Minister Freundel Stuart and the Cabinet of Barbados, who agreed that this time-honoured educational institution should be named after me. On behalf of my wife and entire family, let me express our heartfelt thanks and appreciation for this high honour,” the former Governor-General said.

He attended the school from 1936 to 1943. Boscobel Primary School was an amalgamation of the Boscobel Boys’ and Boscobel Girls’ Schools back in 1992.

Sir Elliott also expressed gratitude to the principal of the school, Norma Worrell, and those persons who successfully petitioned the authorities for the name change. He told those in attendance that Boscobel Primary School was a classic example of the transformational power of the neighbourhood school.

He pointed out that every community needed a focal interactive centre, where teaching and learning could take place, as well as the discussion of local, relevant issues. He said the school had been filling this need for over 125 years.

The former Governor-General further added that they were many other outstanding old scholars who bore testimony to the fact that the institution had taken students from working class backgrounds and propelled them “to elevated positions of power, prominence and prestige”.

“I love this school, and I do so with a passion that is deep and abiding. I am not ashamed to say that a poor boy like me could ever dream of achieving what I have been able to do without the foundation which I got at this school,” Sir Elliott emphasised.

He said he was confident the Elliott Belgrave Primary School would continue to be a force of change in the community, and a centre of excellence to which young people would gravitate. 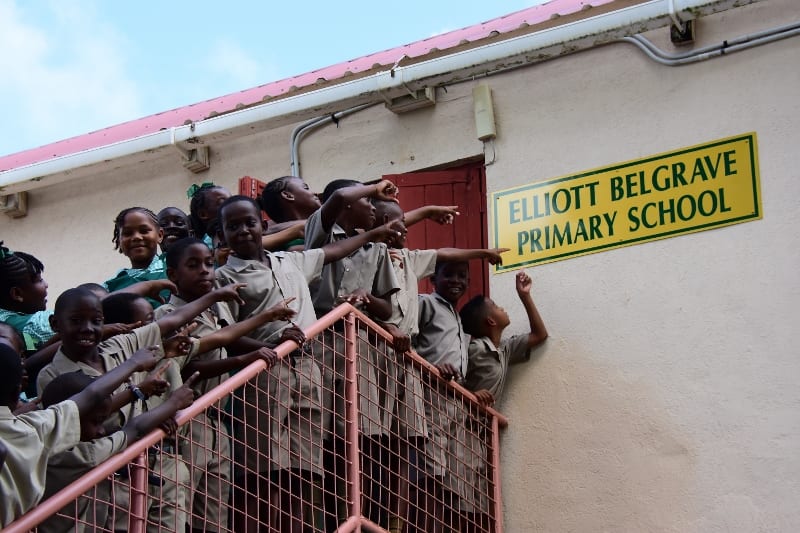 Minister of Education, Ronald Jones, who officially renamed the school, said it was the start of a new era, and noted that Sir Elliott’s mission – to empower the children of Barbados – was a groundbreaking one.

He pointed out that the former Governor-General had the unprecedented distinction of visiting all 73 primary schools “and two special schools”.

“I attended several of his visits and his theme remained the same – essentially, you can learn. Regardless of your circumstances, you can learn and you can become great sons and daughters of Barbados….

“It is only apt that the “accomplishments of a craftsman of our fate is immortalised in a place which provided the foundation underpinning his advancement in society through education….The renaming of this school is, in my opinion, a fitting and worthy gesture for the immeasurable, commendable and altruistic acts of this noteworthy Barbadian,” Mr. Jones stated.

He said, although Sir Elliott had retired, he was still looking out for the youth by launching the Elliott and Loretta Belgrave Scholarship Trust. The fund was set up to assist financially disadvantaged Barbadians with university tuition.