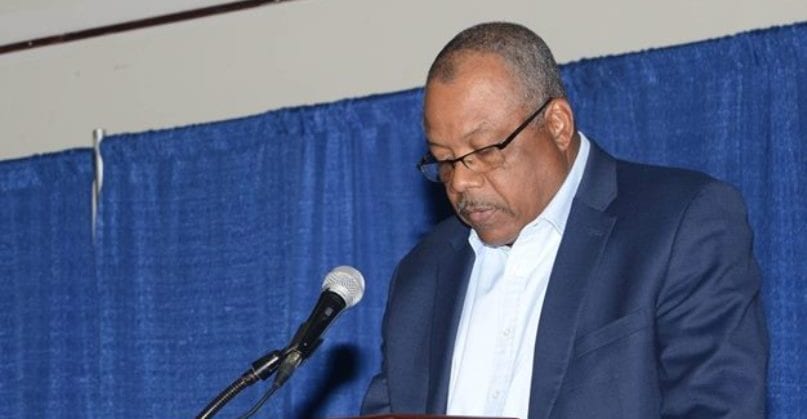 Health Minister John Boyce stresses the importance of timely and accurate health information as the basis for policy formation. (A.Miller/BGIS)

End-stage renal failure is a growing public health problem in Barbados, driven primarily by the high levels of hypertension and diabetes in the population.

This was revealed by Health Minister John Boyce this morning as he addressed the opening of a national consultation for the development of the National Strategic Plan for Health 2017 – 2022.

The consultation, which will run until Friday, brings together stakeholders from the public and private sectors, as well as non-governmental organisations, to map the way forward for health care in Barbados.

The Health Minister reported that the treatment of hypertension and diabetes combined accounted for 58 per cent of expenditure by the Barbados Drug Service last year.

He further disclosed that, according to a 2015 report commissioned by the United Nations Development Programme (UNDP) and the World Health Organisation (WHO), while Barbados spent an estimated BDS $64 million annually treating cardiovascular diseases and diabetes, the total cost was about $209 million annually, due to missed work days, low productivity and reduced workforce participation. This, he said, represented about two per cent of Gross Domestic Product (GDP).

Stakeholders at the opening of a national consultation for the development of the National Strategic Plan for Health 2017 – 2022. (A. Miller/BGIS)

With one in three adults in Barbados being hypertensive and one in five diabetic, non-communicable diseases were firmly fixed as major causes of morbidity and mortality, Mr. Boyce submitted.

The Health Minister told his audience that he envisoned a comprehensive and responsive plan which would meet the present and future needs of Barbadians, given the existing challenges.

He also stressed the importance, going forward, of timely and accurate health information as the basis for policy formulation and evidence-based decision-making.

“At all levels of the Ministry of Health, we need to cultivate a culture of collecting, analysing and using information about the population, the services provided and health outcomes.

“With a rigorous system of monitoring and evaluation in place, we will be better able to measure the level of service performance and quality improvement, from both the perspectives of effectiveness and coverage,” he concluded.