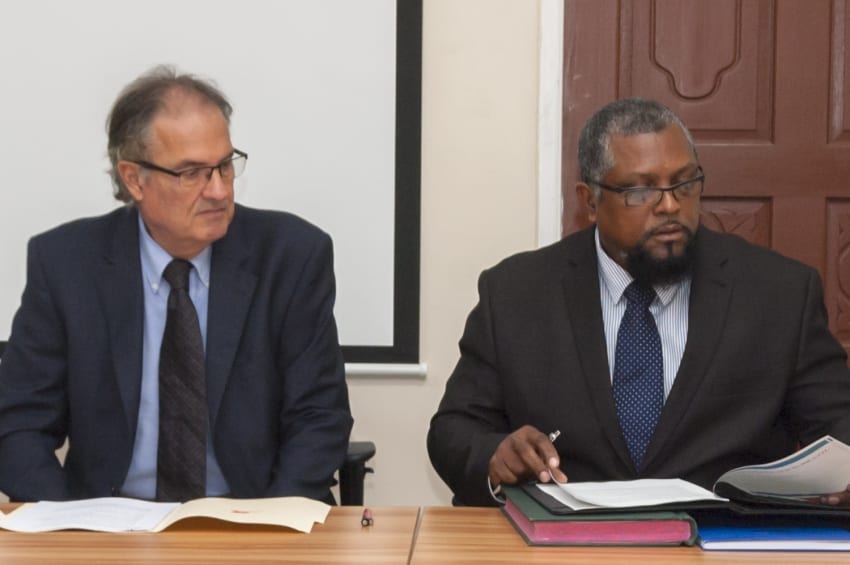 Brazil, the world’s biggest sugar producer, has offered to provide training to Barbadians in new sugar production techniques. This is one area where this country is seeking technical cooperation with Barbados.

Brazil’s Ambassador to Barbados, Luiz Gilberto Seixas de Andrade, who paid a courtesy call on Minister of Agriculture and Food Security, Indar Weir, today, said the training would be through a number of workshops.  He added that he had been closely monitoring the developments within the local sugar cane industry, and was particularly interested in the production of bagasse and ethanol.

The Agriculture Minister told the Ambassador that while he was not sure about the production of ethanol, the future of the sugar cane industry would be one based on co-generation of energy; that is, using bagasse from the sugar cane to generate energy.

Mr. Weir further explained that Barbados was interested in training a new generation of workers in the sugar industry who were proficient in factory skills. The Minister noted that currently, most of the workers with the expertise were “on the older side” and there was a need to train a young cadre of persons who could manage the sugar cane factories.  He pointed out that this was an area where Barbados could benefit from technical training from Brazil.

“Sugar is still very important for us.  We have had very detailed discussions on where we are going to go in the future. What we are doing is increasing our sugar production, our syrup and molasses production; more likely syrup than molasses,” Mr. Weir emphasised.

The Minister said Barbados would be embarking on a lot of training as Government sought to create an easy transition into the International Monetary Fund’s Barbados Economic Recovery Transformation programme, also known as BERT.

Mr. Weir told Ambassador de Andrade that his Ministry was particularly interested in the scholarships Brazil had to offer in the areas of Soil Management Technologies and Sheep Production Systems for Meat.

The Ambassador also cited a number of other areas where Brazil and Barbados could cooperate, including, cassava, cotton, sweet potato and possibly, leather.