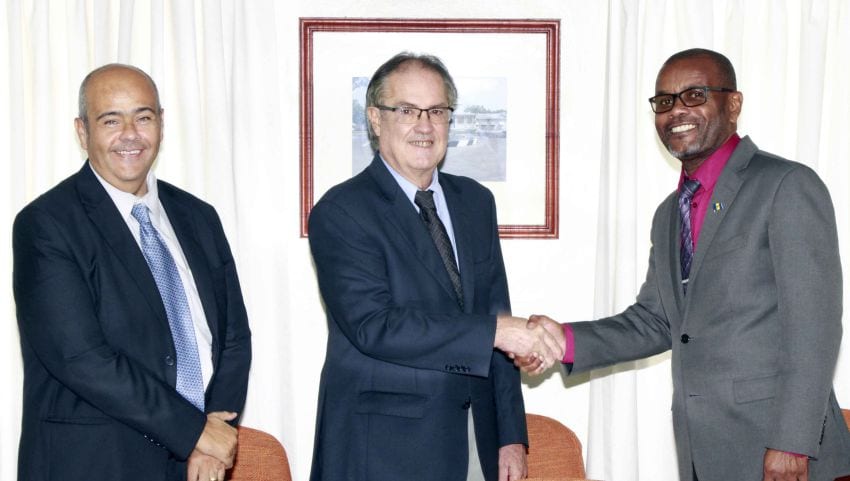 Ambassador of the Federative Republic of Brazil to Barbados, Luiz Gilberto Seixas de Andrade, paid a courtesy call recently on Minister of Transport, Works and Maintenance, Dr. William Duguid and Minister in the Ministry, Peter Phillips, at the Ministry’s Headquarters on Pine East-West Boulevard, The Pine, St. Michael.

Minister Duguid emphasized his desire to explore, with Brazil, the manufacture of concrete board in Barbados. The Minister made the point that not only can the building material be an effective substitute for wood, it can also be used for the siding of a dwelling and to make a congregated, concrete roofs.

Since it is fabricated to withstand up to category three hurricanes and is both termite and fire resistant, Dr. Duguid stressed that, in this way, concrete board could then suitably be exported to the entire Caribbean region.

The Ambassador expressed his interest in the viability that a plant, set up in Barbados to manufacture concrete board, would bring much needed investment and opportunities for the entire Caribbean.

At the invitation of the Minister, the Ambassador indicated his willingness to deploy a Brazilian technical team to Barbados, in order to give technical assistance in sourcing parts for Marco Polo buses bought from Brazil, that are in need of repair.

By the end of the courtesy call, both Minister Duguid and the Ambassador were pleased that a way forward had been chartered, for a potentially successful working relationship between Barbados and Brazil in the near future.