Last weekend, 17 student doctors donned their ceremonial white coats, marking not only their rite of passage into the profession of medicine, but also signifying them as the first group of students to enter the American University of Integrative Sciences (AUIS), School of Medicine at the campus’ new home in Barbados.

Founded in 1999, the AUIS was previously known as the University of Sint Eustatius School of Medicine, and was established on the island of Sint Eustatius by a group of medical school educators and administrators.

In 2013, the school came under new ownership and management, International Educational Management Resources LLC, based in Atlanta Georgia and led by Managing Director Milo Pinckney and President Renu Agnihotri.

Speaking at the ribbon cutting ceremony this weekend to mark the official opening of the university’s Basic Sciences Facility, at #9, 5th Avenue, Belleville, St. Michael, Dr. Edward Layne, a gastroenterologist and native of Barbados, provided the background of the AUIS’ move to Barbados.

Dr. Layne, who served as the Honorary Consul for Barbados in Atlanta for the past 20 years before his retirement last December, was instrumental in paving the pathway for the institution’s move to Barbados.

“Two years ago, a young visionary entered my office, his name was Mr. Milo Pinckney. He said to me, ‘Dr. Layne, I am not a doctor but I am the son of a physician entrepreneur with Caribbean roots’. He said ‘I am a businessman, who owns a medical school and have several patents in the field of medical technology’, and that in my opinion may be able to revolutionise the training of young doctors and the practice of medicine.”

He added that he was quite curious as Mr. Pinckney explained his interest in moving the university to Barbados and deploying a patented, medical information technology device called The Clinical Activity Rotation Log or CARL.

The device contains the templates for state-of-the-art training programmes that encompass traditional western medicine as well as the proven aspects of complementary and alternative medicine, now called CAM. 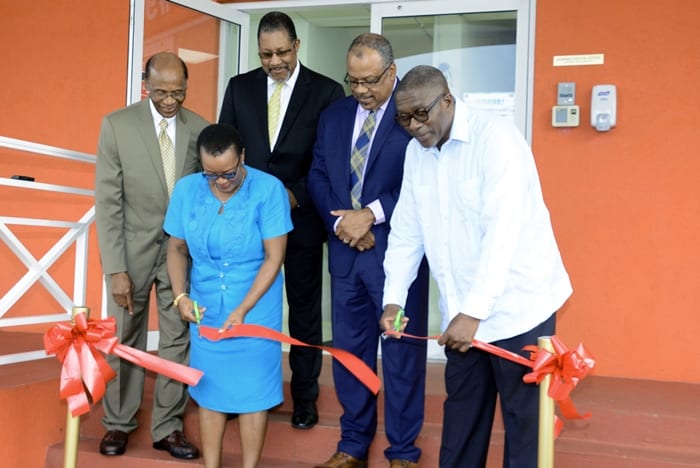 Admittedly impressed by what the young businessman had to say, Dr. Layne saw it necessary to introduce him to the Minister of Foreign Affairs and Foreign Trade, Senator Maxine McClean, while hosting the 4th biennial Barbados Comes to Atlanta event, in Atlanta, Georgia, in May 2016.

Sharing his perspective of the experience, Mr. Pinckney explained that when he met Senator McClean a year and a half ago, “in a moment’s notice” she saw the merit in what they presented when they proposed to move AUIS to Barbados.

“She embraced it with such vigour that she visited our offices in Atlanta to see first-hand what we were doing, and she said ‘I can get behind it’ and championed the move here…”

Highlighting Barbados’ literacy rate and the rank by the US Department of State as “one of the most politically transparent nations on the planet”, he believes Barbados has many unique qualities and presents tremendous opportunities for his institution.

“In our short tenure here, we have developed a great partnership with Senator McClean and Dr. Layne, [who] facilitated our relocation. The growth of our institution and our contribution to the island of Barbados will come together entirely, so I thank you all for your support and most importantly, for your recognition of a quality programme and the opportunity for us to bring it here,” he expressed.

Similar to Dr. Layne, Senator Maxine McClean admitted that while attending the Barbados Comes to Atlanta event, which is intended to engage Barbadians in the diaspora to explore opportunities, she was enthralled by the opportunity Mr. Pinckney had presented. 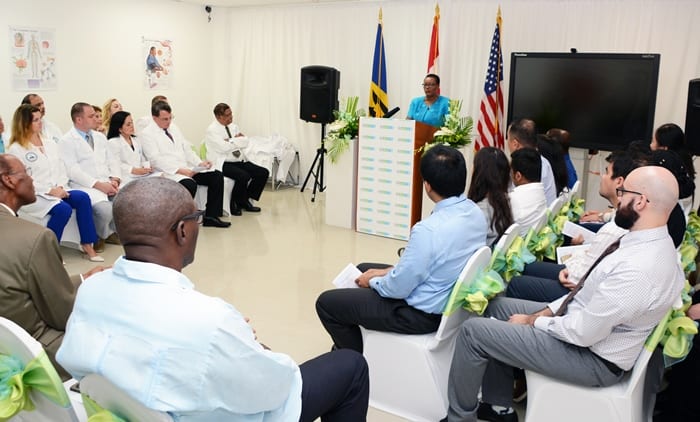 “I bought into the idea from the presentation, [which was] supported by a distinguished Barbadian in the form of Dr. Layne, who himself has been a medical practitioner for many years, and would have been involved in the startup of another medical institution. I recognised I had to come back to the Prime Minister, and my Cabinet colleagues here in Barbados and share the opportunity.”

The Minister of Foreign Affairs explained that convincing her colleagues was “not a hard task” as they all recognised the potential of the institution as it has been demonstrating its capacity to produce good students.

“It is my hope that given the importance of medical training and the demand globally for medical training, that there will be opportunities for synergies to be forged between our traditional medical faculties at the University of the West Indies and the programmes offered by the American University of Integrated Sciences,” she added.

Speaking to the incoming students gathered at the ceremony, Senator McClean shared with them the benefits of the move.

“Being in Barbados gives you the opportunity to experience not only state-of-the-art medical training but the opportunity to live in a small society, which, in many respects, has demonstrated the capacity of a resource scarce nation to engage the world and to demonstrate that we are able to foster a level of development and quality of life that is of interest to other countries.”

The Minister thanked Dr. Layne and Mr. Pinckney for their vision and interest to move the university to the island’s shores.