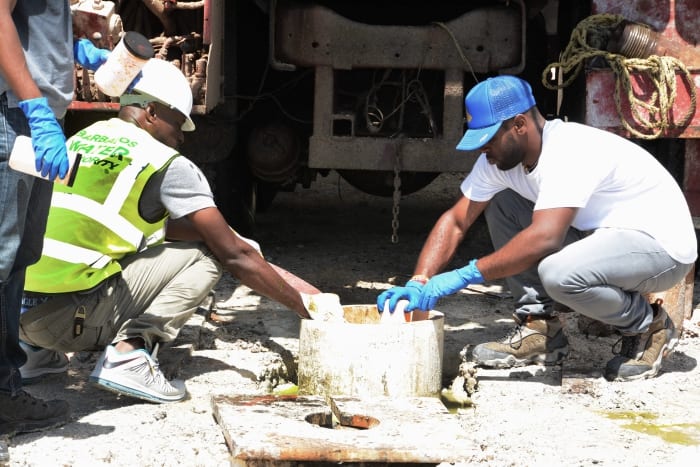 Personnel from the BWA placing dye into the first well near the south coast sewage plant. (B.Hinds/BGIS)

The Barbados Water Authority’s (BWA) Waste Water Division (WWD) has started dye testing on the first of four proposed injection wells, designed to allow the discharge of pre-treated sewage deep underground, so remedial work can be carried out on the south coast sewerage network.

The dye testing, requested by environmental and health authorities, will determine if the well field, located near the south coast sewerage plant, will pose any environmental threat.

This morning, WWD personnel introduced a non-harmful fluorescent green dye into the well, and over the next few days, as explained by Water Quality Technologist with the BWA, Alex Ifill, they will monitor several “sample sites” to see if there is any dye residue.

The sites are two springs located north and south of the plant; the Graeme Hall Swamp; and the nearshore at Worthing Beach.

In an interview with the Barbados Government Information Service, Mr. Ifill stated: “The objective of these samples is to catch any dispersion. We’re going to inject some florescent dye into the test well here and we’re going to let it run through the ground, because you’re going over 100 feet or 125 feet down to see if this dye will emerge at any one of the sites over the next four days.

“Each day, we will be taking samples [from the aforementioned sites] to make sure that none of the dye reappears in the water. When we finish this test, these samples will be sent overseas to Ozark Laboratory and we will get back the results in about a day and they will tell us if the dye has recirculated,” he explained.

Ozark Underground Laboratory is a groundwater consulting firm based in Missouri in the United States that provides hydrogeological services. It has also designed, conducted and assisted with groundwater testing in Canada, New Zealand, Australia, Indonesia and Peru.

The Water Quality Technologist noted that once the water samples test negative for the dye, authorities will proceed with plans to commission the wells. However, if there is evidence that the dye has recirculated, they will have to “redesign their disposal option”.

Mr. Ifill reiterated that the injection wells were a temporary solution, and stated their purpose was to “facilitate the disposal of sewage” so the WWD could install a sewage by-pass. This, he explained, would divert the flow of effluent away from the compromised section of the network, allowing the Division to carry out repairs.

“Once the by-pass has been implemented, these wells will be closed off, capped and held in good condition in case there is a similar event; they are not to be used on a continuous basis,” he stressed. He pointed out that while a temporary by-pass had already been created near Scotiabank at Hastings, a “more comprehensive” system was to be introduced.

The proposed injections wells are part of a $12.9 million plan announced by Minister with responsibility for Water Resource Management, Dr. David Estwick, last month. He said both the wells and by-pass systems were the “best option” of those suggested by regional and international consultants.