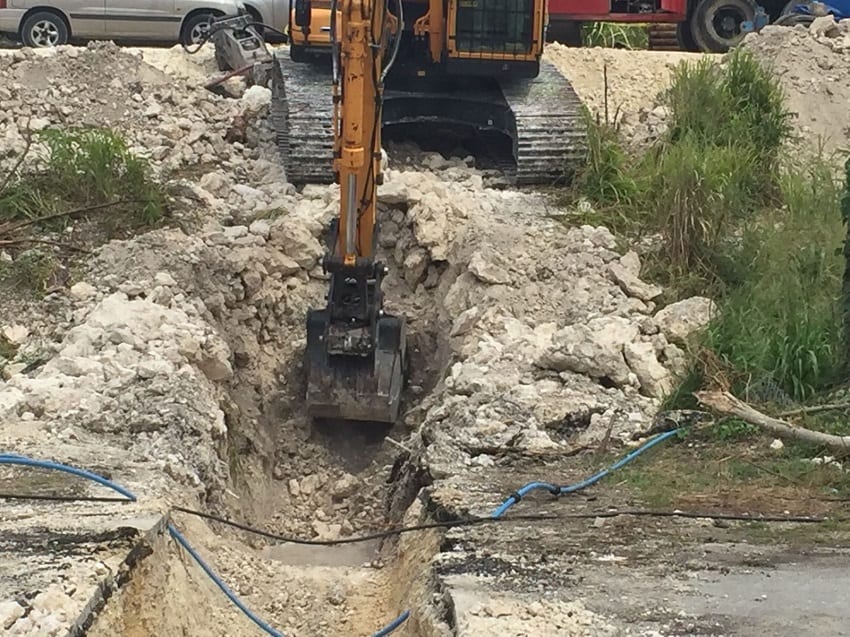 The excavation of a trench into which pipes will be laid, connection the well to plant. (GP)

The Barbados Water Authority’s (BWA) Waste Water Division is making progress with the development of the proposed injection well field, one of the measures to alleviate the sewage issues on the south coast.

This assurance came from the BWA’s Director of Engineering, Charles Leslie, during a site visit this morning to the south coast sewage plant in Harmony Hall, Christ Church.

Providing a project update, Mr. Leslie explained that pre-treated sewage would be discharged into the wells in order to facilitate the drainage of the network, so authorities could inspect and fix the breached sewer lines.

He disclosed that the BWA had dug three six-inch boreholes, each measuring three-hundred feet, as part of their geological testing to determine the depth at which to discharge the treated sewage.

“We’re going to widen each of those boreholes using a 20-inch bit and install an approximately 17-inch casing. That casing will take it to approximately 150-feet down and what we will do is use that depth to begin to inject the waste water.

“Once the first one is completed we will do dye testing and this will allow us and the other agencies like the Environmental Protection Department and the Ministry of Health, to know exactly the direction of the sewage flow. Once this dye-testing is completed, we will then attempt to repair the force main and the sanitary main on Highway 7. We could not have done that before because we needed somewhere to divert the waste,” Mr. Leslie explained.

The Director of Engineering provided some insight into why this method was chosen, explaining that in 1989 when the south coast sewage plant was being designed, the only method for the emergency disposal of waste was the channel from along the Graeme Hall Swamp, leading out to the sluice gate. “As we all know, that is not as acceptable as it was back then. So, we had to find an alternative,” he added.

Mr. Leslie also reassured the public that the BWA’s Waste Water Division was working assiduously to address the problem, adding that the work on the injection wells was progressing rapidly, with the first one expected to be completed within a week.

The wells, as explained by Minister responsible for Water Resource Management, Dr. David Estwick, at a press conference last weekend, are a short-term measure that forms part of a $12.9 million plan to address the south coast sewage issue.

Dr. Estwick gave the assurance then that authorities would focus heavily on chlorination, screening and other methods to ensure that the waste water did not pose any threat to the environment.