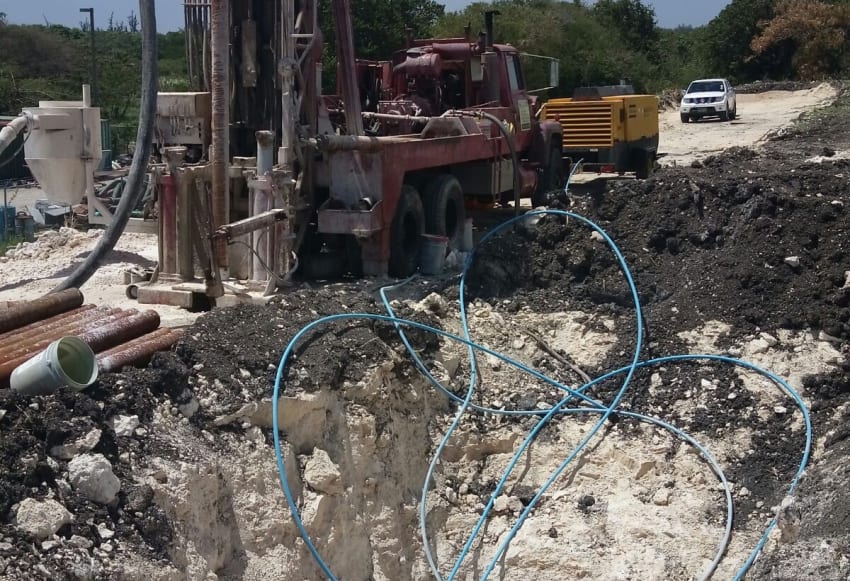 The Barbados Water Authority’s (BWA) Waste Water Division has commenced work on the second of three injection wells, which are to be used temporarily to facilitate the discharge of sewage underground so remedial work can be carried out on the breached sewer lines.

Speaking with the Barbados Government Information Service this afternoon, at the South Coast Sewage Treatment Plant at Harmony Hall, Christ Church, Director of Engineering at the BWA, Charles Leslie, said the Authority had already drilled to a depth of just over 140-feet underground, and was hoping to reach approximately 150-feet by the end of today.

He explained that the ultimate depth of the wells is determined by the geology of the area, and once they have reached the desired depth, they would then focus on “removing the finds and so forth from that well.”

Mr. Leslie further stated: “after we do that, we‘re going to be dealing with the insertion of the casing in the well and we’re going to start that casing and grouting over the weekend.”

The Director of Engineering also noted that the pipe infrastructure connecting the wells to the plant was almost complete, “That pipeline is already in place for the three wells …we just have a small piece to install at the head of the plant and that is going to be completed early next week.”

He said the results of dye tracing tests on the first well were soon expected from the overseas laboratory. Mr. Leslie added that the BWA expected to begin testing on the well next week, to determine its capacity.

“Pump testing of a well allows you to get capacity of the well, [this is] the ability to either absorb water or to extract water. We’re going to be doing extraction, so we’re going to start at a very low quantity, then we will go up to what we think is half the capacity, then full capacity, then we’ll go up to what we think is 150-percent of the particular well, and that information we would’ve gotten from the geological data that we would’ve gotten from the initial boreholes,” he explained.

Mr. Leslie said that the testing would allow for determination as to whether the three wells which are being dug would accept the full waste from the plant or if additional wells would be needed.

The BWA has explained that the injection wells will be used for a short period to facilitate the installation of sewer by-pass systems, thereby allowing for repairs to be carried out on the breached section of the sewerage network.