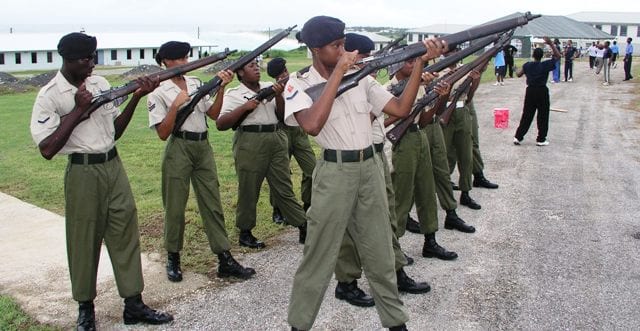 Some 800 cadets will soon be enhancing their military skills when the Barbados Cadet Corps hosts its annual summer camp.

It will be held from Monday, July 10, to Saturday, August 5, and cadets will be trained in areas such as drills, weapons training, shooting, first aid, land and sea navigation, seamanship, music, and field training exercises. The cadets will also participate in orienteering and training for the Duke of Edinburgh International Bronze Award.

The camp will be conducted in four phases for the various star levels. Phase one will run from Monday, July 10, to Friday, July 14, and is for cadets who will be potential instructors.  Phase two will be from July 16 to 22 for the Sea Cadets; the Master Cadets; Star 3; and Star 1 Alpha.

Phase three, which will be for Star 1 Bravo, Star 4 and the cadets of the band, runs from July 23 to 29, while the final phase will go from July 30 to August 5 for Star 2 cadets.

During the period, there will be a Family Fun Day on Tuesday, August 1, which will target former and current cadets, their families and supporters. The summer camp will conclude with the Commandant’s Parade on Saturday, August 5.