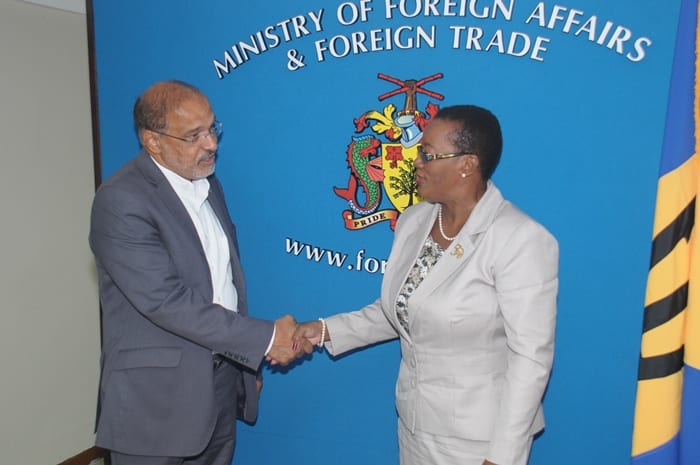 Outgoing Sub-regional Coordinator of the Food and Agriculture Organization (FAO), Dr. J. R. Deep Ford, is pleased with the work that his office has accomplished in Barbados and the region during his tenure.

However, he would like to see more 100 per cent homegrown food products being made and sold. He made the comments recently during a farewell visit to Minister of Foreign Affairs and Foreign Trade, Senator Maxine McClean, at her Culloden Road office.

Dr. Ford listed the development of a “blended” bread, made with cassava flour and wheat flour by a local bakery, as one of the projects that his office was successful in implementing to encourage the use of locally-grown products.

Adding that the bread could be found on a number of supermarket shelves, he noted that this was the first such venture that had reached such a level of success.

The Sub-regional Coordinator also pointed out that the FAO had similarly assisted in the development of a gluten-free cassava and carambola muffin which was currently being sold in a coffee shop at its four outlets island wide.

“They have doubled their order; it’s gluten free and made with 100 percent domestic products…I feel that this can become a major part of breakfast,” he said.

Senator McClean lauded Dr. Ford for the work that his office had done to promote the use of locally-grown food in Barbados and the region.

She added that the Barbados Agricultural Development and Marketing Corporation was also promoting the use of products like cassava, breadfruit and sweet potato, as well as creating opportunities to commercialise these and other products.

The officials also discussed the need for more young persons to understand the benefits of eating healthier meals, particularly as more of them were developing chronic non-communicable diseases at earlier ages.

Dr. Ford noted that the FAO had assisted in the implementation of a number of school programmes throughout the region, where students were educated about the importance of making the correct life-long food choices.

Other areas discussed included the FAO’s Small Rudiment Programme, which was designed to enhance sheep production; the development of programmes to get more youth interested in food production; and the importance of food security.