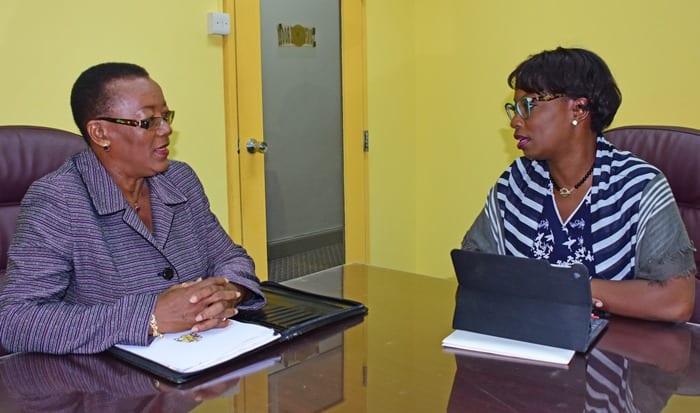 Minister of Foreign Affairs and Foreign Trade, Senator Maxine McClean and Parliamentary Secretary to the Minister of International Development of Canada, Celina Caesar-Chavannes, during their meeting today. (C.Pitt/BGIS)

“Canada values its long-standing and current relationship with Barbados”.

This was the assurance given by Parliamentary Secretary to the Minister of International Development of Canada, Celina Caesar-Chavannes to Barbados’ Minister of Foreign Affairs and Foreign Trade, Senator Maxine McClean during a recent courtesy call held in the  Conference Room of the Ministry of Tourism and International Transport, Two Mile Hill, St. Michael.

The Canadian official stated that her country continues to value its bilateral relations and is “sensitive to the vulnerabilities of small island states”.

She stressed that her presence represented Canadas’s dedication to listening and understanding the challenges with which the island is faced, and also to discuss any possible opportunities which could arise, for future collaborations.

Speaking to their bilateral relationship, she reiterated the strength of their good relations and maintained that the Government of Barbados is appreciative of their past and present collaborations.

The Foreign Minister also told the Parliamentary Secretary about the Ministry’s hopes to collaborate in business opportunities which “have the potential for significant growth”, highlighting Science Technology, as one such area.