St. James Primary students and teachers making their way to the assembly point at Trents Plantation during the Caribewave Exercise today in Holetown, St. James. (A.Husbands/BGIS)

And, while Director of the Department of Emergency Management (DEM), Kerry Hinds, said the exercise achieved “moderate success” overall, she noted that there were some aspects of the CAP system that needed to be tweaked and improved.

“Today, we had a number of glitches. What the exercise brought out for us was that we need to tweak some aspects of the Common Alerting Protocol system. Some persons indicated that the sound on their telephones was not loud enough, and we have to go back to our national warning focal point which is the MET Office to clear up some issues there,” she stated.

Meanwhile, Ms. Hinds thanked the close to 1,000 persons who signed up to receive messages under the CAP system within the last few days.

Speaking in the aftermath of the exercise, Ms. Hinds said it was designed to test the island’s tsunami warning protocols, the evacuation procedures of a number of businesses and schools within the Holetown area, along with the communication systems.

She explained that Holetown was chosen as the pilot community to receive the UNESCO internationally approved Tsunami Ready Certificate of Recognition.

Today’s community drill, the Director said, was one of the 10 criteria which was required to achieve such status. However, she noted that the erection of signage as it relates to evacuation routes, and having designated hazard and safe zones, were among the areas outstanding. 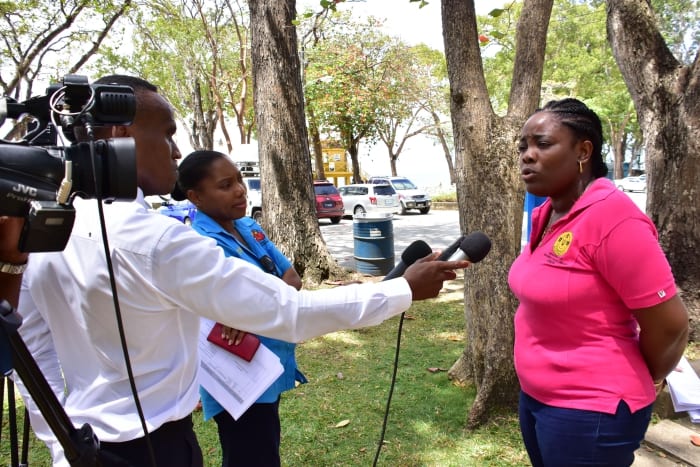 Director of the Department of Emergency Management, Kerry Hinds, speaking to the media following the Caribwave Exercise in Holetown this morning. (C.Pitt/BGIS)

“All in all, we would have completed seven out of the 10 criteria….  We are on the Road to Tsunami Recognition,” she said, noting it was hoped that Holetown would achieve its designation on World Tsunami Awareness Day on November 5.

Today’s Caribe Wave 2018 exercise was based on the scenario of an 8.3 magnitude earthquake generating a tsunami which affected Barbados.

Just after 10:00 a.m., email alerts and notifications via the CAP app on cellular phones went out indicating that a “tsunami warning was issued for Barbados” under the title of “exercise, exercise, exercise”.

This prompted the evacuation of a number of agencies, including the Mango Bay Hotel, Scotiabank Holetown, the Royal Barbados Police Force’s Holetown Station, and St. James Primary School.

However, Ms. Hinds stated that while she was happy with today’s exercise, there was still a need for more businesses and organisations to get on board with the process.

“It really would assist [them] in gauging what to tweak, or if [they] need to tweak anything, and how they would perform if something really happened,” she reasoned.

The DEM Director added that overall, her organisation was looking at increasing community readiness and resilience. “This is part of an ongoing effort to ensure that we improve national readiness for any type of hazard. Our focus is on the earthquake and tsunami hazard this month and that is why we chose to do the evacuation drill as it relates to the occurrence of a tsunami,” she noted.