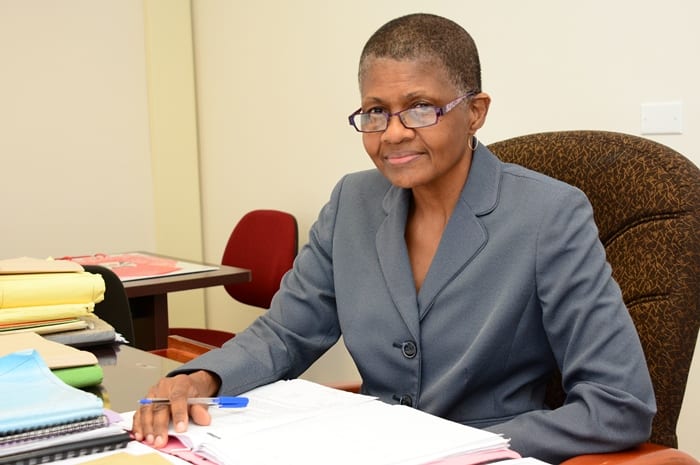 Retired Permanent Secretary in the Office of the Attorney General, Diane Campbell. (C.Pitt/BGIS)

Do not wait for Government to send you on a course to further your studies; make the investment and upgrade your qualifications yourself.

That’s the one piece of advice retired Permanent Secretary in the Office of the Attorney General, Diane Campbell, wants to leave behind for young civil servants, especially those who want to move through the ranks in the service. She is living testimony to the benefits that can be derived from investing in one’s future.

Friday, March 31, 2017, marked the last official working day for Ms. Campbell, who is now looking forward to retirement, and pursuing interests in research. During an interview with the Barbados Government Information Service, the retired Permanent Secretary confessed that her first love was History.

She entered the public service in August 1977 as an Administrative Assistant, now referred to as Administrative Officer 2, in the Ministry of Education, fresh out of the University of the West Indies with a degree in History.

She spent two years in the Tertiary Section, before being appointed and moving on to the Establishments Division, now the Ministry of the Civil Service, where she spent another three years. Not one to be limited, Ms. Campbell’s journey through the civil service continued with stints in the Ministry of Culture and Community Development as an Administrative Officer.

But, though she entered the service with a passion for History, life would chart a different course for Ms. Campbell, who continued her studies and became a Chartered Secretary with the Institute of Chartered Secretaries and Administrators of England.

“I was in the system and I had a liking for History and wanted to do my Masters in that area, but common sense said that was not what I needed to advance in the system and I switched my focus to do post graduate studies in Management,” she pointed out.

On completion of her Chartered Secretaries designation, Ms. Campbell moved on from being an Administrative Officer I, to fill a vacant post at the Student Revolving Loan Fund (SRLF) as a Secretary/Accountant, before it was upgraded to Administrative Manager. 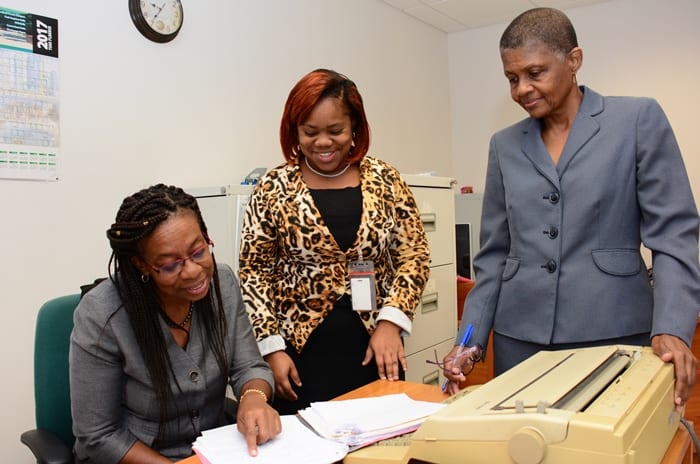 Ms. Campbell (right), pictured here going through files with staff of the Attorney General’s office, encouraged young civil servants to invest in their future and gain the necessary qualifications. (C.Pitt/BGIS)

Still, she had a bigger goal in mind – to one day become appointed as a Permanent Secretary, and thought it necessary to further improve her qualifications.  Ms. Campbell successfully completed a Master of Management degree in 2008. By 2011, she was appointed to the post of Permanent Secretary at the Office of the Attorney General.

Looking back at her career, Ms. Campbell said each position involved a different subject matter, requiring her to work in a variety of specialised areas, and being exposed to information to which she would not normally have access.

However, she emphasised that working in the Ministry of Health often required her to be on the cutting edge and strategic in her thinking. “Though it was a lot of work, it also provided opportunities for a lot of learning. The strategies I learnt there can be taken anywhere and applied to other subject areas,” Ms. Campbell observed.

The retired Permanent Secretary cautioned young civil servants against waiting to be sent to do a course. “I did my studies on my own because at the end of the day they were for my own personal development,” she advised. 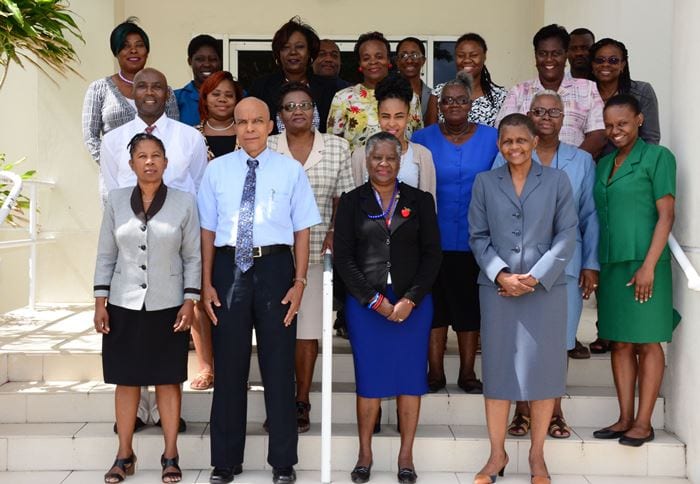 Ms. Campbell added that the Qualifications Order spells out what is needed to move up in the system, and therefore it was important to do what was necessary to upgrade one’s qualifications to ensure that the requirements were met. “That’s why you should use your initiative and upgrade your skills,” she stressed.

She also encouraged them to have a positive work attitude and avoid saying “it does not fall within my job description” when called upon to do additional assignments. Having accomplished her goal to become a Permanent Secretary, Ms. Campbell said she now has more time to follow through on her personal interests in research.

“I want to go back to doing more research. It is important to know your roots, and on what basis you reach where you are today,” she said.

However, there is a musical side to Ms. Campbell. A member of the St. James Parish Church choir, she has sung with a number of other choirs, including that of the St. Michael’s Cathedral, and she can read music. “I have a basis in piano, having completed the Royal School of Music exams several years ago,” the mother of two revealed.

Admitting that she was looking forward to retirement, Ms. Campbell noted that after 39 years in service, it was time to make room for the younger people. “I made my contribution to national development. I want to go when I am still on top,” she stated.