Caribbean Countries Need Each Other

Prime Minister Mia Amor Mottley is of the firm view that Caribbean countries cannot confront the realities of climate change without cooperating with one another.

Ms. Mottley expressed this view last evening as she delivered remarks during the opening ceremony of the 65th Meeting of the Organisation of the Eastern Caribbean States’ (OECS) Authority, in St. Lucia.

She told her audience that the region was reminded of its own fragility in 2017 when some islands were devastated by hurricanes.

“The only way we can move forward, conscious that we’ve already started another hurricane season, is by recognising that our fragility requires of us an effort and a commitment that goes beyond anything that we have seen thus far. It is impossible for any one of us to confront the realities of climate change without cooperation.

“I make the point all the time that Barbados, which revels in the fact that our educational system has delivered so much over the decades, can find itself confronting issues of access tomorrow if a hurricane hits us, rather than seeking to perfect the qualitative aspects of our educational system. All of us are vulnerable,” she emphasised.

The Prime Minister suggested that irrespective of membership in CARICOM, countries must find modalities to help each other, particularly as they confront issues of climate change and adapt to boost resilience as they go forward.

“The most evident aspect of it on a day-to-day basis to our population is the movement of the sargassum seaweed. We have had to confront it as you do across the rest of the region. 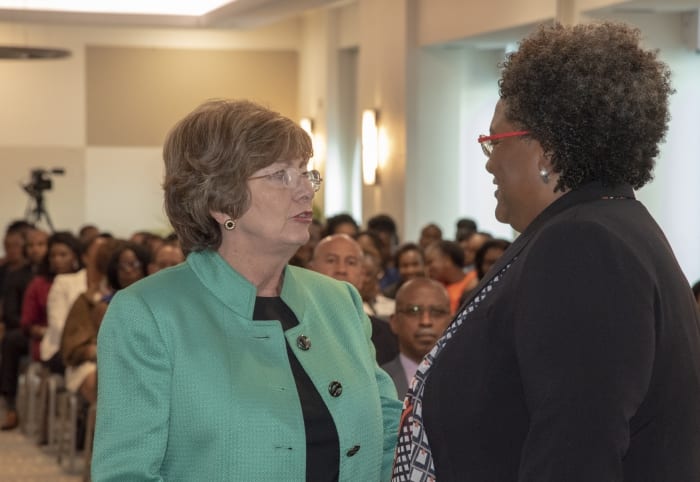 Prime Minister Mia Amor Mottley chatting with United States Ambassador to Barbados and the Eastern Caribbean, Linda Taglialatela, at the opening ceremony of the 65th Meeting of the Organisation of the Eastern Caribbean States’ (OECS) Authority in St. Lucia yesterday. (GP)

But we believe that our best efforts are when there are cooperative. And to that extent, our ability to be able to harvest the sargassum seaweed collectively and to be able to maximise what economic benefits we can get from it, rather than treating to it as a nuisance that affects our coast and our tourism industry, is the way in which we would wish to pursue discussions.

“Similarly, we have come to this point to recognise that these meetings mean nothing unless they bring benefit to our people and we’re conscious that whatever the modalities are for deepening cooperation between Barbados and the Eastern Caribbean, we would wish to be able to ensure that we confront, at all times, those things that are of immediate concern to our people.”

Ms. Mottley noted that the level of inter-governmental cooperation did not match that which the people and private sectors engaged in. She stressed, therefore, that the opportunity afforded Barbados to participate in the two-day meeting in St. Lucia must be pursued to see where “it can take us”.

“We don’t know. But what we do know is that conversation and dialogue are absolutely critical in order to be the bedrock of progress as we move forward,” she pointed out.