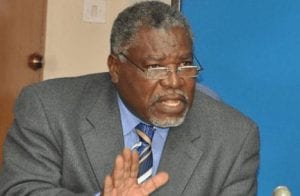 This country’s CARICOM Ambassador, Robert Morris, is suggesting that the regional body needs to re-tool itself to secure its future, and achieve its development objectives, in light of the rapidly changing and challenging global environment.

He made the comments on Thursday, while addressing a series of sensitisation seminars on the CARICOM Gender-Sensitive Results-Based Management System (RBM) at Baobab Tower, Warrens, St. Michael.

Given the constraints and vulnerabilities of CARICOM, the RBM system in the CARICOM Secretariat is scheduled to begin in early 2018. Pointing out that the RBM will be instituted at the Secretariat, Ambassador Morris gave the assurance that its principles will be adopted by the other two implementing partners – CARICOM Member States and regional institutions.

He said: “Barbados welcomes the development of the gender-sensitive RBM system, and we look forward to its prompt implementation across the region. We consider it to be a critical element in the effective pursuit and achievement of the region’s integration and development objectives.”

Ambassador Morris continued: “The adoption of the RBM system has the potential to change the way in which we carry out our business at a national level, driving a more results-oriented approach to programming. Its promotion of a results-oriented culture within CARICOM will redound to the benefit of both Member States and the organisation.”

The Ambassador also addressed seminars held in the Barbados Workers’ Union Hugh Springer Auditorium and at the Lloyd Erskine Sandiford Centre during the sessions held from November 23 to 24.