(Pictured above) Damage to homes in the Turks and Caicos Islands following the passage of two Category 5 hurricanes. (S. St. Hill/BGIS)

When an RSS2 aircraft touched down at the Providenciales International Airport in the Turks and Caicos Islands a few weeks ago, it was the continuation of a series of visits to the various islands severely impacted by the recent passing of two Category 5 hurricanes.

A British territory, the Turks and Caicos is an associate member state of CARICOM.

The delegation was met by the Premier of Turks and Caicos, Sharlene Cartwright-Robinson, who briefed the officials on the situation on the ground. She disclosed that although there was severe damage throughout the territory, and, in particular, the island of South Caicos, there was no loss of life or major public health challenges.

The Premier also reassured the region and international community that her country was “resilient”, and that there was law and order.

Mrs. Cartwright-Robinson further explained that almost 90 percent of the infrastructure and housing stock in Providenciales had been compromised.  The team, along with local media personnel, visited an elementary school, one of many which served as shelter for local residents. Although the school was damaged, it provided a place of refuge for those who lost almost everything.

The next stop on the tour was The Bahamas. Of particular interest was Ragged Island, a quaint lobster and conch fishing community of approximately 80 persons, located about 50 minutes by plane from the main island of New Providence.

The entire island was decimated by the unforgiving winds of Hurricane Irma. All the power lines were down, a reality made even more poignant by the fact that the country only received electrical services 15 years ago. Only 13 persons chose to remain on the island to pick up the pieces of their lives and rebuild the community.

Following the tours, Mr. Jackson noted that all of the islands affected have had major disruptions to the mainstays of their local economies, namely fishing and tourism. However, he stated that the recovery and reconstruction process was ongoing and efforts by the regional agencies were proving successful. 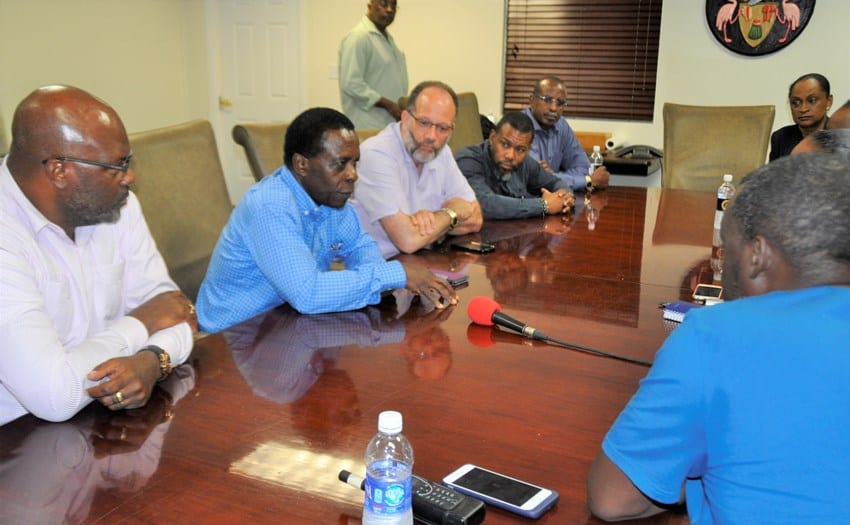 In his remarks to the media, Ambassador LaRocque reiterated CARICOM’s firm commitment to supporting the rebuilding of the nations affected by the recent hurricanes. He said that CARICOM was “fully behind them” and would continue to advocate in the international community on their behalf through the implementation of the Donors Conference – a group of international donors that would help raise funds to assist the affected countries.

CARICOM’s Chairman, Dr. Mitchell, also gave his commitment to the continued support of the regional agencies and praised CDEMA and the RSS for their hard work and dedication to the services rendered to these nations.

CDEMA and the RSS collaborated to mobilise the CARICOM Disaster Relief Unit (CDRU). The CDRU is a recce team which comprises regional military, police and fire personnel to access the impacted areas and make recommendations on how best to coordinate and commence the relief efforts.  The RSS aircraft and team play an instrumental role in transporting the regional high-level ministerial staff along with the CDRU to the affected areas.

Barbados’ Attorney General, Adriel Brathwaite, also reaffirmed his country’s support to the region during these times of difficulties. Barbados continues to play a major role in the deployment of teams from the Barbados Defence Force, the Department of Emergency Management, medical and other technical personnel to assist in the continuing relief efforts. The Barbados Coast Guard vessel, HMBS Rudyard Lewis, currently makes relief trips to the islands.