CARIFESTA XIII Given Thumbs Up 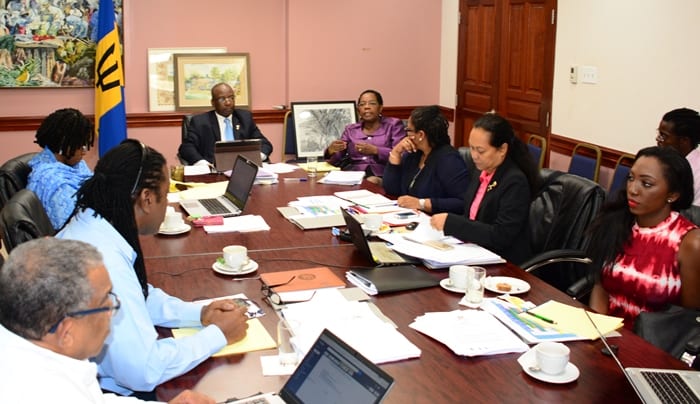 A regional stakeholder has lauded Barbados for its preparations for this year’s CARIFESTA XIII celebrations.

During a meeting with Minister of Culture, Stephen Lashley, at his Sky Mall Ministry, Programme Manager for Culture and Community Development at the CARICOM Secretariat, Dr. Hilary Brown, said that Barbados was “on a good track so far”, as it prepared to host the region’s largest arts festival from August 17 to 27.

Dr. Brown is a part of the visiting interim festival directorate, an advisory committee of CARICOM that meets to advise, guide and make suggestions towards the development of CARIFESTA.

Noting that this was the second progress meeting on Barbados’ CARIFESTA preparations, the programme manager said that with the festival only a few months away, it was an especially “critical” meeting.

Highlighting some of CARIFESTA’s components, Dr. Brown expressed her approval of Barbados’ plan to possibly expand on the Grand Market and Buyers’ Shopping Mall model.

According to her, the two components came out of a model that was introduced in Suriname for CARIFESTA XI. She remarked that Barbados’ developments on the model were “a very good expanded innovation within this CARIFESTA”.

Speaking on some of the general challenges that are often faced during the preparation for the festival, Dr. Brown noted that late confirmation of attendance and submission of information could often be a “major hindrance” as the date nears.

“I think perhaps some of the gaps are largely because not enough information is coming from all of the countries…This is not unusual because very often it goes with the budget year of different countries, so they are waiting on approval  of national budgets before they can finalise their delegations,” she explained.