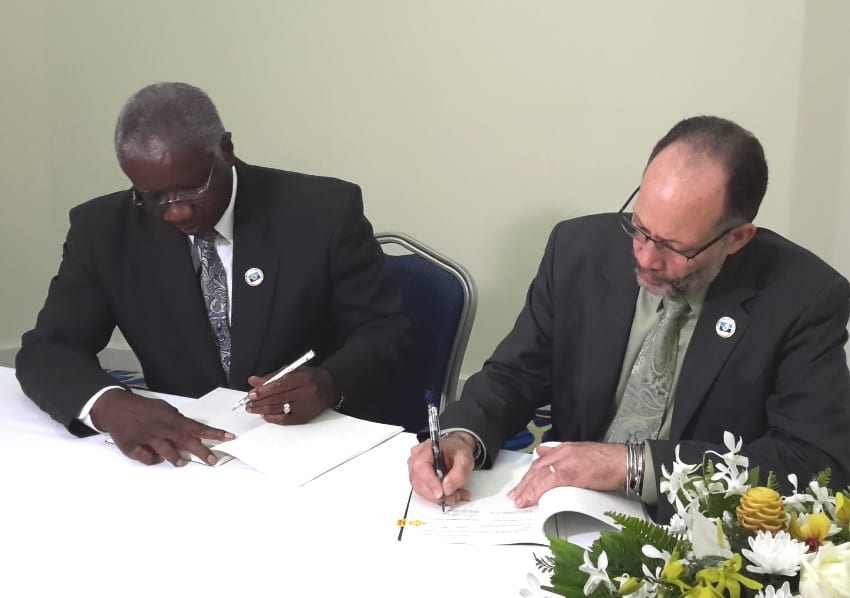 Prime Minister Freundel Stuart (left) and CARICOM Secretary-General, Ambassador Irwin LaRocque, signing the agreement to host CARIFESTA XIII, during the Thirty-eighth Regular Meeting of the Conference of Heads of Government of CARICOM at the Grenada Radisson Beach Resort. (C.Lashley/BGIS )

Prime Minister Freundel Stuart has given the assurance that Barbados will not engage in excessive spending when it hosts CARIFESTA XIII next month.

He made this assertion on Thursday after he signed an agreement to host the festival with CARICOM Secretary-General, Ambassador Irwin LaRocque, as the Thirty-eighth Regular Meeting of the Conference of Heads of Government of the Caribbean Community came to a close at the Grenada Radisson Beach Resort.

In response to a question from the media about spending for the event, Mr. Stuart stated: “We intend to be very disciplined in this exercise and to ensure that wherever savings can be effected strategically without compromising the integrity of the festival, we will ensure that those savings are made.”

The Prime Minister noted that the festival was last held in Barbados over 30 years ago. He added that Government had made a commitment to host the event on behalf of the people of the Caribbean and Barbados was looking forward to meeting its obligations.

The last CARIFESTA was held in Haiti in 2015, and CARIFESTA XIII will take place in Barbados from August 17 to 27. Trinidad and Tobago will host CARIFESTA IV.