CARIFESTA XIII To Be Bigger & Better 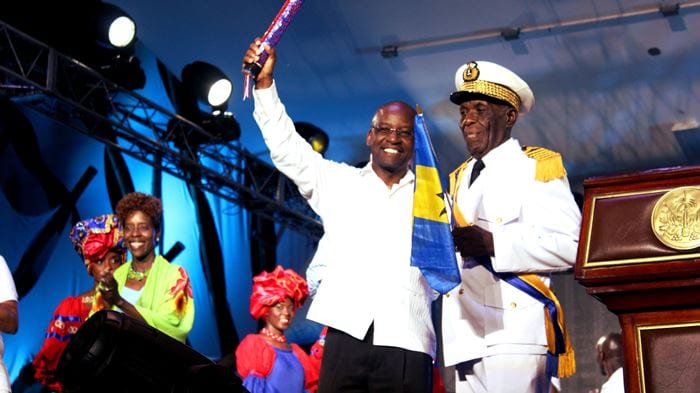 Minister of Culture, Stephen Lashley (centre), receives the baton at the close of CARIFESTA XII in Port-au-Prince, Haiti in 2015. (J.Weekes/BGIS)

CARIFESTA XIII will be like no other before it!

Minister of Culture, Sports and Youth, Stephen Lashley, expressed this view today as he updated members of the media on plans for Barbados’ hosting of the upcoming regional arts festival.

Mr. Lashley stated that CARIFESTA was “no longer a festival where artistes meet and just have a show or display a few cultural performances”. Rather, he said it must now connect with the vision of Caribbean governments to use their cultural industries sectors to “propel us to new vistas of economic growth and development”.

“Our hosting of CARIFESTA at this time is certainly key to our strategic platforming for economic growth, and using creativity is a key plank of that…. We expect that CARIFESTA will attract a significant number of visitors; this will also translate into heightened economic activity. Barbados has a great opportunity in terms of the impact that CARIFESTA can have on the economy,” he said.

The Culture Minister disclosed that in addition to the traditional events such as the opening and closing ceremonies, signal events, super concerts, country nights and fringe events which were normal features of the 14-day festival, it was thought necessary to also expand the Grand Market to include a Buyers’ Shopping Mall.

As a result, a number of international buyers have been invited to these events.

He explained that this move would give the buyers the opportunity to visit an exhibition of cultural goods and services in a market place environment, which exclusively features Caribbean creative products.

Mr. Lashley also noted that one of the main goals was for CARIFESTA to reflect the regional push for the development of the cultural industries.

“Since 1981, so much has happened in terms of the cultural landscape of the region…. Several countries, including Barbados, have gone the route of placing a lot of emphasis on the creative sector, and the cultural industries today loom large as being a new frontier for economic development. CARIFESTA, within the context of 2017 and going forward, would have to reflect the realities of what is happening within the region,” he signalled.

CARIFESTA XIII, which will be held from August 17 to 27, will be the second occasion that Barbados has hosted the regional festival; the first time being in 1981. This year’s theme is: Asserting Our Culture, Celebrating Ourselves.