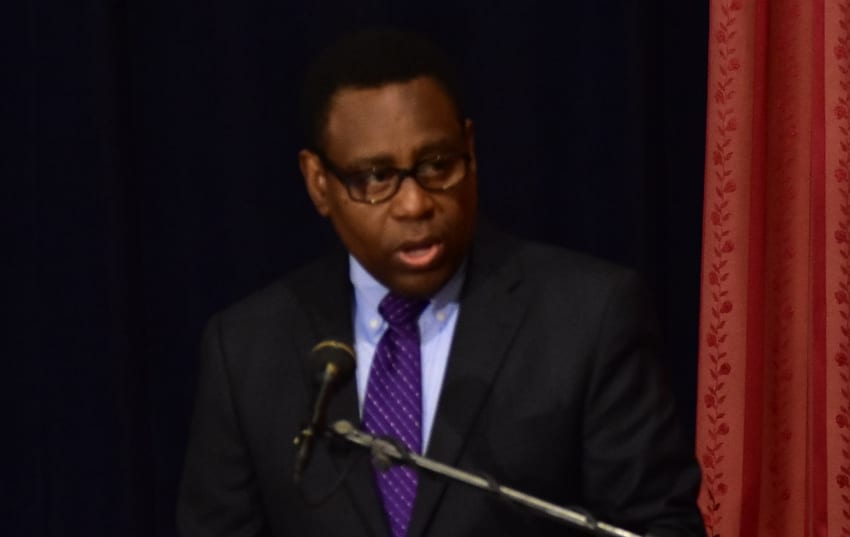 Governor of the Central Bank, Cleviston Haynes, speaking at the opening of the Week of Excellence 2018 Programme at the Courtney Blackman Grande Salle. (C.Pitt/BGIS)

Barbados has to pay greater attention to business facilitation.

This view was expressed by Governor of the Central Bank, Cleviston Haynes, on Monday as he delivered remarks at the opening of the Week of Excellence 2018 Programme, at the Courtney Blackman Grande Salle.

Mr. Haynes said the economy would require greater levels of local and foreign investment going forward and it was therefore incumbent on all to assist in making Barbados a more attractive place to do business.

He continued: “There is frequent criticism of what private sector players see as inefficient bureaucracy. We cannot ignore those criticisms.  We need therefore to review existing policies and explore the potential for accelerating the use of technology in the quest for faster delivery of services.  Moreover, we must at all times be responsive to requests, queries, applications etc. so as to ensure timely service delivery.”

The Governor suggested that local firms needed to enhance their competitiveness to compete in the globalised economy, where size often acted as a constraint to penetrating markets and to growth.

“This requires our firms to innovate, by seeking to move away from old business models and old systems of operating, and instead move towards the development of new ideas and business models, taking on-board new technological advances as they present themselves.

Expressing the view that productivity would be enhanced as workers were able to embrace new skills, Mr. Haynes noted that the role of the educational system would become more critical as citizens were prepared to adapt to the changes in technology that were likely to come on stream in the future.

“At the same time, by investing in the raising of the knowledge, skills and abilities of workers, firms can develop workers that can operate at a higher level, thereby raising the national output of our economy,” he suggested.

He underscored the importance of reinforcing the message of raising productivity levels, saying he did not believe that the country’s productivity and service levels were where they should be, particularly in an environment where competitors were also trying to raise their standards.