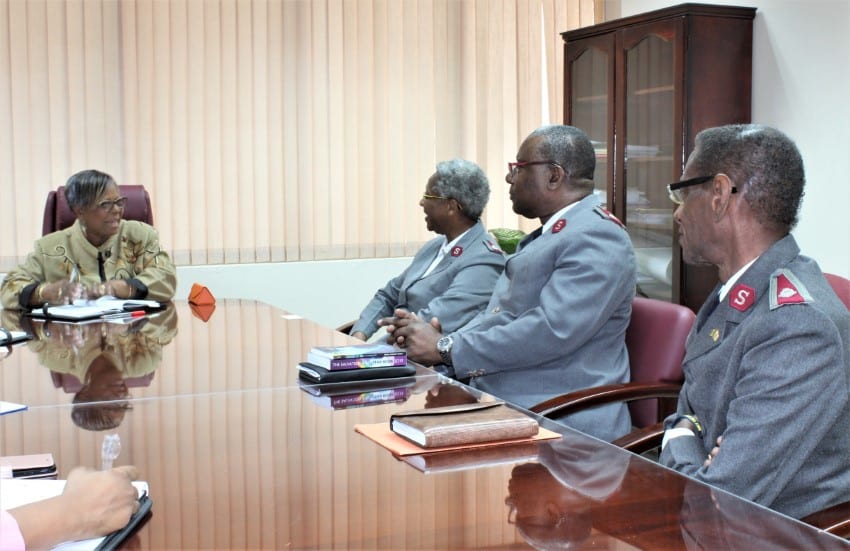 The Salvation Army has announced plans to provide a day care centre for seniors and a shelter for battered women.

Major Wilkinson disclosed that the shelter would serve about 15 to 20 women and children, while the day care centre would accommodate approximately 30 senior citizens. In addition, the Salvation Army is also introducing a mentorship programme where trained officers will be doing outreach work in the community to assist both young people and older adults.

Minister Forde welcomed all three initiatives, noting that they were critical areas, where the need was great.

She stressed the importance of security for a battered women’s shelter and emphasized the need to be able to shelter not only the women but also their children.

With respect to the elderly, the Minister who holds responsibility for Elder Affairs, told the delegation from the Salvation Army that as she has settled into the portfolio what she has discovered in relation to elder abuse has been “beyond my wildest dreams”.

“I receive so many letters, some of them handwritten, of our senior citizens being threatened by neighbours and being taken advantage of, not only by neighbours but by family, friends, pastors and lawyers.”

She said many of them had health issues caused by conditions such as Alzheimer’s and diabetes and there was no-one to care for them.

She therefore welcomed the proposed day care facility which, she said, would complement the facilities operated by the National Assistance Board, and would offer the elderly somewhere to congregate and reminisce as well as to engage in activities such as handicraft, games and exercises which promoted wellness and kept them active.

Minister Forde offered Government’s support to the Salvation Army in bringing the project to fruition.

At the end of the meeting, Major Wilkinson, who was accompanied by his wife, Major Joan Wilkinson, Divisional Director for Women’s Ministries; and Major Denzil Walcott, Community Relations Director, presented two books to the Minister.