Centre Of Excellence For Education 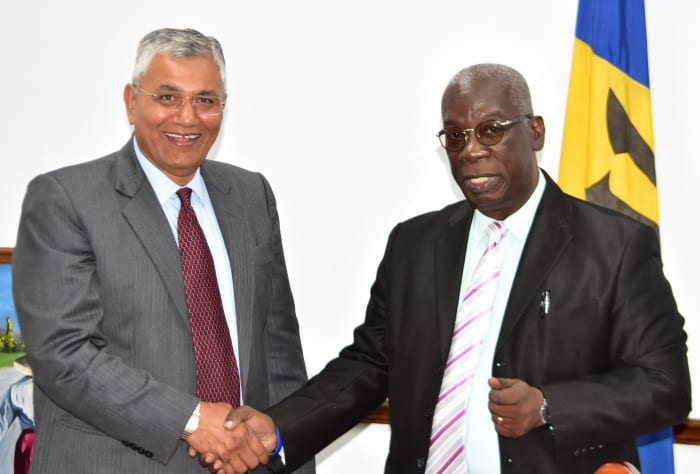 Minister of Education, Science, Technology and Innovation, Ronald Jones, greets India’s Minister of State for Law and Justice and Corporate Affairs, Shri Chaudhary, at the start of their recent courtesy call at the Elsie Payne Complex. (C.Pitt/BGIS)

Government wants to make Barbados a centre for excellence in education across the globe.

Mr. Jones said Barbados was looking at various centres of excellence, with Mr. Chaudhary expressing the view that medical education would be a good area for Barbados to concentrate on. He suggested that more students from his country would come here if education was compatible.

Minister Jones stressed that this island’s education system was “quite good”, but believed it could be improved. He said there was a need for more resources and expressed appreciation to India, saying that over the years, Barbadians had benefited tremendously from a number of scholarships. He added that any offering of educational assistance to small island developing states was important in their quest for excellence.

Describing India as outstanding in the area of technology, he opined that Barbados could benefit greatly from its expertise.

Minister Chaudhary said quality education was very important to India, adding that it was an area in which his country invested heavily. He noted that traditionally, both countries have always had close relations and thanked Barbados for supporting India, especially at international fora.