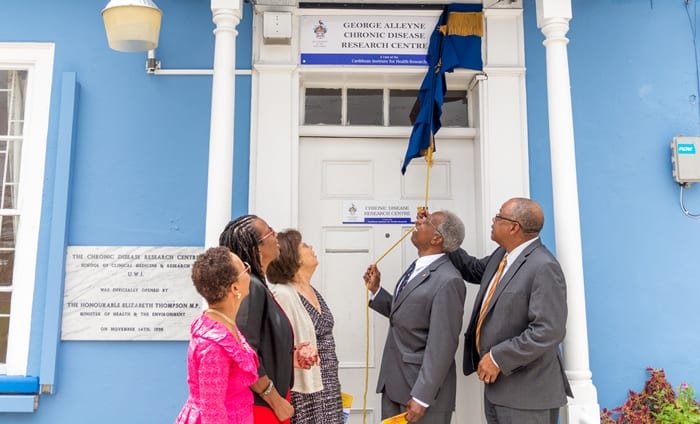 The 25-year-old Chronic Disease Research Centre has been officially renamed to honour the work and achievements of Professor Sir George Alleyne.

Speaking at the unveiling ceremony today, Minister of Health, John Boyce,  described the event as a “momentous occasion” to honour one of the Caribbean’s “most illustrious” sons:

“This renaming is special for a number of reasons. This honour recognises Sir George’s legacy and will ensure that his name is associated with an institution that seeks to embody the scholarship in, and dedication to, medicine and public health, which he has demonstrated throughout his life,” Mr. Boyce stated.

The Health Minister pointed out that Barbadians and regional citizens should be exceptionally proud of Sir George’s achievements.

“This renaming is therefore a tangible expression of our collective pride and gratitude… It is also a bold statement to the world and speaks to who we are as Barbadians and Caribbean people,” he maintained.

Mr. Boyce praised Sir George and saluted him for his career as a Professor of Medicine; Director of the Pan American Health Organization; United Nations Special Envoy on HIV; and as the Chancellor of the University of the West Indies (UWI).

“You have been a champion to all of us, ever pushing us to reach for higher and better ideals for the people we served…you have established a legacy for all of us to emulate…” he told Sir George.

The Minister also expressed his gratitude to the past and current directors of the research centre as an “invaluable partner in the vital area of health research in Barbados”.