Chance To Win Land For Crop Over 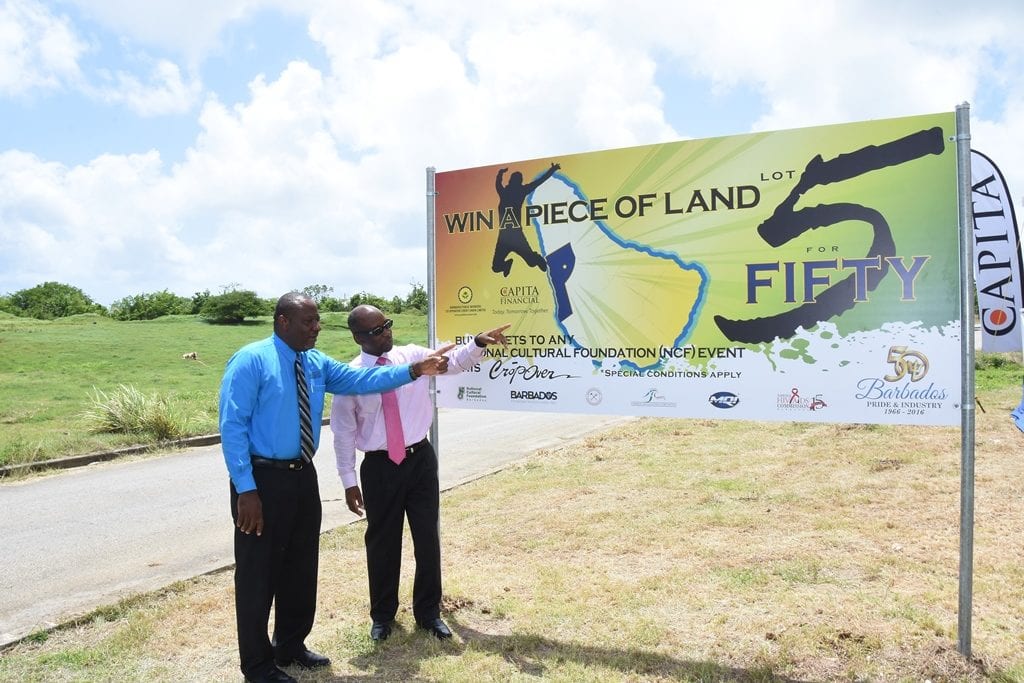 Crop Over lovers now have a chance to win a 4,300 plot of land this festival season.

Minister of Culture, Sports and Youth, Stephen Lashley, made this disclosure today at the launch of the Lot 5 For Fifty promotion, held on the chosen lot in Deanstown Terrace, St. James.

The competition, a special Crop Over promotion for the country’s 50th anniversary of Independence celebrations, is sponsored by the Barbados Public Workers’ Co-operative Credit Union Limited, Capita Financial, the National Housing Corporation, and the National Cultural Foundation (NCF).

Speaking to members of the media during the launch, Mr. Lashley gave the initiative his stamp of approval. “I’m very excited about it. I believe that it really speaks to the focus of what we do in the NCF,” he pointed out.

Adding that Crop Over was “more than a festival”, he said, such a promotion proved that the NCF was serious about “empowering people and transforming the psyches of Barbadians”.

Mr. Lashley praised the various organisations which partnered to make the project a reality, and noted that it would help to “empower at least one Barbadian resident with a piece of the rock”.

He stressed that the promotion required “the full deployment” of sponsors, and that Crop Over needed to be “fully partnered” with the private sector as the festival would grow only through the enhancement of such partnerships.

The Minister of Culture was also hopeful that the competition would greatly assist in further boosting the numbers of persons attending Crop Over events.

President and Chief Executive Officer of Capita Financial, Paul Maxwell, said that his organisation was “extremely pleased” to be a part of the promotion.

“Lot 5 For Fifty is open to all Barbadian residents over the age of 18 years. The competition requires persons to fill in the required information on the backs of tickets for any paid event on the NCF’s Official 2016 Crop Over Calendar.”

The competition’s draw will take place at the end of the Crop Over Festival in August.