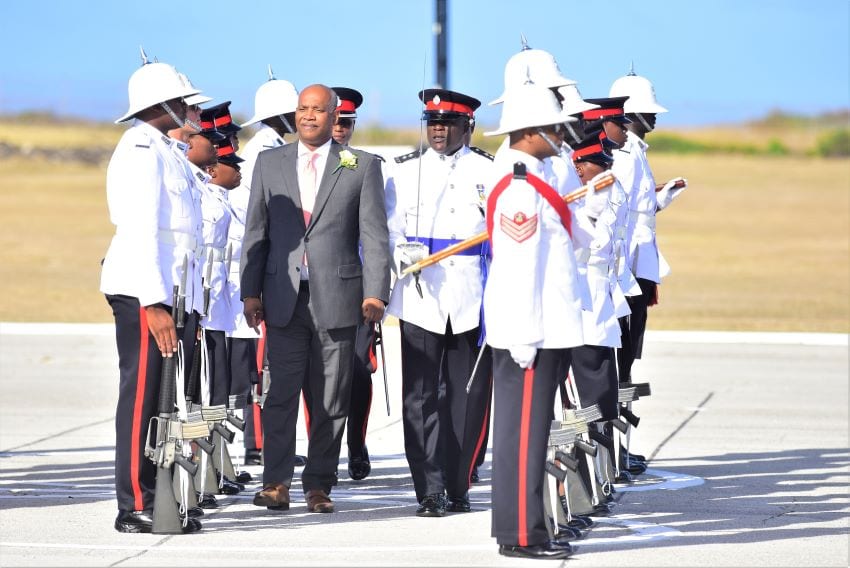 Attorney General and Minister of Legal Affairs, Dale Marshall, inspecting the troops during the 143rd Passing Out Parade and graduation ceremony for recruits from the Regional Police Training Centre yesterday. (C.Pitt/BGIS)

Faced with declining enrolment numbers, Cabinet has agreed to amend legislation to increase the upper age limit of those seeking to enlist in the Royal Barbados Police Force from 30 to 35.

In addition, Attorney General and Minister of Legal Affairs, Dale Marshall, disclosed that government would also be removing the statute that specified a height and chest size requirement as criteria for enlisting.

He made these disclosures during the 143rd Passing Out Parade and graduation ceremony for recruits from the Regional Police Training Centre on Wednesday.

“There are some simple things that we recognize are out of place in a modern Barbados…. Under our Police Act, you must be no younger than 19 and no older than 30 years old to be taken in as a police recruit.  There is also a height and chest size requirement.  While there may be a good sensible purpose to limit the age, we consider that in today’s Barbados a maximum age limit of 30 is too low, if we are going to recruit an increased number of police officers,” he stated.

The Attorney General said the present roll of the Royal Barbados Police Force stood at 1, 528 officers, with 280 vacancies. Only 19 officers passed out yesterday.

The Minister said one of the biggest challenges for the Commandant of the RPTC and the Director of Training was the declining numbers of persons seeking to recruit.

He noted that in 2008, there were two intakes; the first with 35 and the second with 20 recruits.  In 2009, that number stood at 32 and 37 over two intakes, but had reduced to just one intake with 39 individuals in 2010.  “It seems as though over the years there has been a steady decline,” he indicated.

Mr. Marshall disclosed that Commissioner of Police Tyrone Griffith was tasked with increasing the marketing of the force so that young men and women would once again see policing as a viable option, and a career.

The attorney general stated that the nature of the matters the police had to contend with today such as money laundering, financial crimes, and white collar crimes required skills in a new kind of policing, and a new model of detective work.

“We have to ensure that our police officers are fully trained in those elements and not a single one of them has anything to do with how tall or short you are,” Mr. Marshall said.