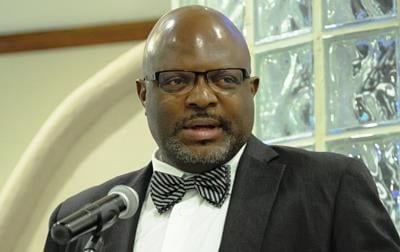 The construction of high-rise buildings across Barbados, and the use of new chemicals and materials on the market, all present new challenges for fire officers, and necessitate additional training.

Minister of Home Affairs, Adriel Brathwaite, raised this issue as he addressed the opening ceremony of the 2016 Convention of the International Association of Black Professional FireFighters (IABPFF) at Hilton Barbados Resort today.

The week-long convention is being held under the theme: Still Fighting Fires and Racism.

Mr. Brathwaite told the approximately 200 firefighters that the new trends represented a break from tradition in Barbados, where fire officers of the Barbados Fire Service (BFS) and others throughout the region mainly fought house, bush and cane fires.

However, he stated that these changing trends also presented new opportunities for training: “One of the challenges we have going forward is that we are moving into an era where we have high-rise buildings in Barbados… It is an area [in which] I think we need to spend more time training our officers, and may be an area that we can explore further within your organisation …”

Mr. Brathwaite, who is also Attorney General, further noted that efforts were being made to develop Barbados as the hub for training at its Arch Hall, St. Thomas fire station.

In addition, Mr. Brathwaite disclosed that the Barbados Fire Service’s fleet was in the process of being renewed and modernised to ensure that the Service remained a progressive organisation.

Divisional Fire Officer with the BFS, Mervin Mayers, confirmed that the Service presently had 16 tenders, of which four were stationed at the Grantley Adams International Airport, and the remaining 12 at fire stations. Three new tenders, he indicated, are expected on the island within the next two to three weeks.

He also agreed that the face of fire-fighting had changed over the years, and was now considered as a science and an industry which could not be ignored.

Regional Director of the IABPFF, Bernard Bowen, noted that the organisation’s mission was to fight for equal rights and opportunities for minority firefighters worldwide.