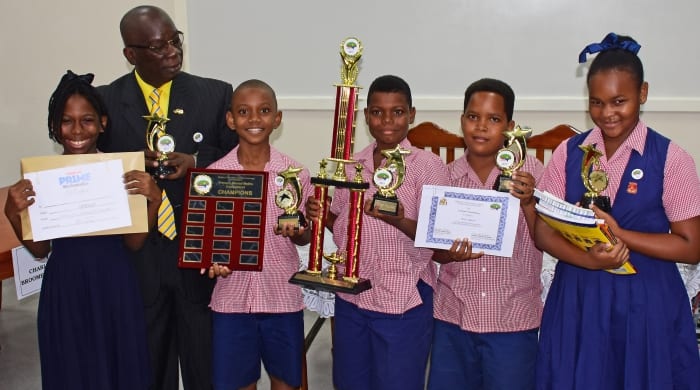 Impressed by the high quality of the Finals and the mental acuity of the students, Minister of Education, Science, Technology and Innovation, Ronald Jones, said afterwards: “It showed the immense mathematical aptitude that lies in our primary schools.”

The Minister was, however, quick to point out that there was still a long way to go in encouraging all students to respond to Math “in a sensible way” and move the Math scores in the 11 Plus from 54 per cent to higher.

“We need to get those scores up; we need to get children truly appreciating Math, not only the Mathematical high flyer’s in our schools but all children being able to work Mathematically and to pull that area up.

“We cannot be speaking about Science, Engineering and Mathematics (STEM) and we don’t have all our young people firing on all cylinders.  So, we need to re-conceptualise and refocus so that we can reach there. If we are able to have the country earning at the higher level of the global economy and at the higher level of the individual pursuits of employment, then STEM education has to be foremost in our minds and in our actions,” he maintained.

Stressing that the competition was just the beginning of the Ministry’s new journey in this mathematical pursuit, he praised the Curriculum Section for its vision and the opportunity provided to the participants. 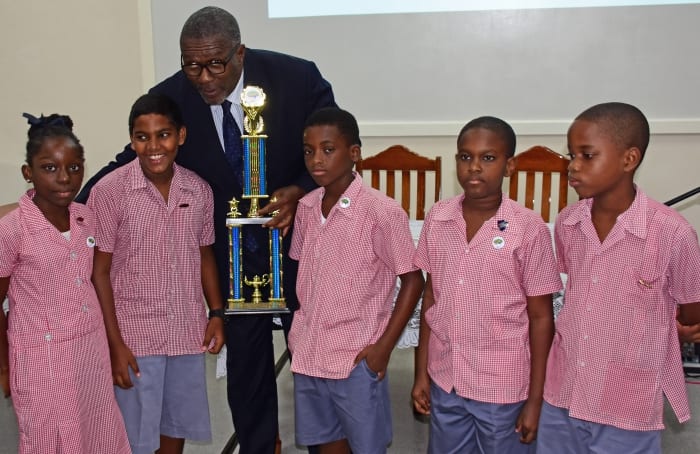 The students of Cuthbert Moore Primary, seen here with Parliamentary Secretary in the Ministry of Education, Senator Harry Husbands, placed second in the competition. (C.Pitt/BGIS)

Mr. Jones noted that the development of mathematical skills would not only inspire greater confidence and success in Maths but would allow them to function efficiently and effectively in their everyday lives.

“The importance of teaching the skills and strategies associated with Mental Maths has regained prominence in the landscape of mathematics teaching and learning over the last decade. Considerable research has been conducted in this area and it has been revealed that the part of the brain responsible for effective calculations will atrophy if left underutilised and that the opportune time to hone students’ mental math abilities is between the ages of five to 10,” he pointed out.

He added that in order for our students to be adequately prepared for the mathematical demands of school, work and everyday life, their mental maths skills and abilities must be harnessed and developed to their fullest potential.

Among the benefits he said existed with Mental Maths and participating in such competitions were: the development of logical thinking; better memory, sharp observation; improved comprehension capabilities; enhanced listening skills and heightened self-confidence.

An initiative of the Ministry of Education, Science, Technology and Innovation, the Mental Maths Competition was a feature of the Education Month calendar. It aimed to provide a showcase for students to display their skills and generate a greater interest in Mental Maths within schools.