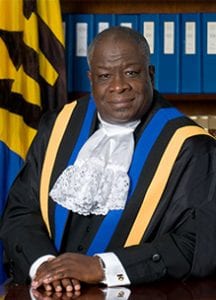 Chief Justice Gibson was born on 3 March 1954 and was educated at St. Matthias School, Foundation School and Harrison College. He pursued legal studies at the Cave Hill Campus of the University of the West Indies from 1972 and obtained the Bachelor of Laws (LLB) in 1975.

In 1977, he was awarded the Rhodes Scholarship and read for the Bachelor of Civil Law (BCL) at Keble College, Oxford University in England, which he obtained in 1979. From 1979 to 1981, he attended the Hugh Wooding Law School, St. Augustine, Trinidad and Tobago, where he was awarded the Chairman’s Special Prize for Evidence and Procedure in 1981.

While attending the Hugh Wooding Law School, he lectured in Criminal Law at the Faculty of Law, St. Augustine Campus, University of the West Indies (“UWI”). From 1981 to 1987, he was a lecturer at the Faculty of Law, Cave Hill Campus, UWI, where he taught Criminal Law, the Law of Real Property, Law in Society (Jurisprudence), as well as Equity, Doctrines and Remedies.

In 1992, he was appointed a Judicial Referee in the Surrogate’s Court, New York County (Manhattan), where he heard cases involving estates and trusts, particularly where there was a need to establish kinship between petitioners and the deceased persons whose estates they were claiming. He served in that Court until 1998, when he transferred to the Supreme Court of New York, Nassau County (Long Island).

Chief Justice Gibson holds Bar membership in several jurisdictions including Barbados, Antigua and Barbuda, and Trinidad and Tobago. He is also a member of the New York State Bar and is admitted to practise before the United States Supreme Court, as well as the Unites States Federal Courts for the Eastern and Southern Districts of New York.

He was an Instructor in the Paralegal programme at Lehman College, City University of New York from 2000 to 2008, where he taught various subjects including Estates, Wills and Trusts, Legal Drafting and Business Law.

Chief Justice Gibson is also a musician and plays the guitar, although he prefers the bass guitar. From 1981 until 1987, he was a member of the National Crop-Over Festival Orchestra which supplied accompaniment to the competitors in the Pic-o-de-Crop competition which takes place during the Crop-over Festival in Barbados. He also sings bass in the choir at St. Ambrose Anglican Church, and has been a member of the choir of St. George’s Episcopal Church in Hempstead, New York.

From 1984 to 1987, he was the moderator of “Guttaperk”, a call-in radio programme on the Caribbean Broadcasting Corporation, and for over 15 years, he was a member of the St. Matthias’ Scout Troop where he attained his Queen’s Scout Badge. He brings to his job a background of over 32 years of teaching and working in the judiciary, as well as diverse hobbies and interests.

On 30 November 2012, as part of the National Independence Honours, Chief Justice Gibson was conferred the Honour of Knight of St. Andrew with the title Sir Marston Gibson, K.A.