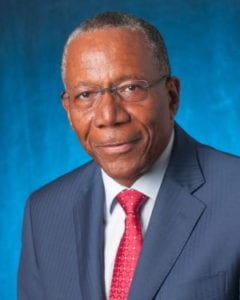 Sir Patterson Cheltenham, K.A. has over forty-two years’ experience as a legal practitioner.

For well over three decades, Sir Patterson served as one of the principals of a leading law office in Barbados, Charlton Chambers. He has represented both corporate and private clients before several tribunals, the High Court, Court of Appeal, Privy Council and Caribbean Court of Justice. An eminent practitioner in the areas of insurance and personal injury law, he also earned a sterling reputation for his proficiency in other areas such as public law, employment-related claims, takeovers and mergers.

Although he established himself as a formidable civil litigator, Sir Patterson consistently pursued out-of-court negotiations and other forms of non-litigious dispute resolution. His ability to adapt to emerging alternatives to dispute resolution led to him becoming an Accredited Mediator and a Fellow at the Chartered Institute of Arbitrators (CIArb), as well as the Education Co-ordinator of CIArb (Caribbean Branch) in June, 2016.

Over the years, Sir Patterson served on several boards and tribunals. These include seventeen years as the Chairman of Barbados Revenue Authority’s Value Added Tax Appeal Tribunal and a twenty-seven-year stint as Chairman of the Board of Management of his beloved alma mater, The Lodge School.

He also served as a lecturer and tutor at the University of the West Indies, Cave Hill Campus in the Faculty of Law and the Faculty of Social Sciences. His unwavering commitment to education, the legal profession and public service led to his admission to the inner bar in 2001 and a conferment of the national award of Gold Crown of Merit in 2012.

Sir Patterson became a Knight of St. Andrew in November, 2020. He continues his public service and contribution to the legal profession through his appointment as President of the Caribbean Community Administrative Tribunal (CCAT) in 2019 and, more recently, his appointment to the post of Chief Justice of Barbados.