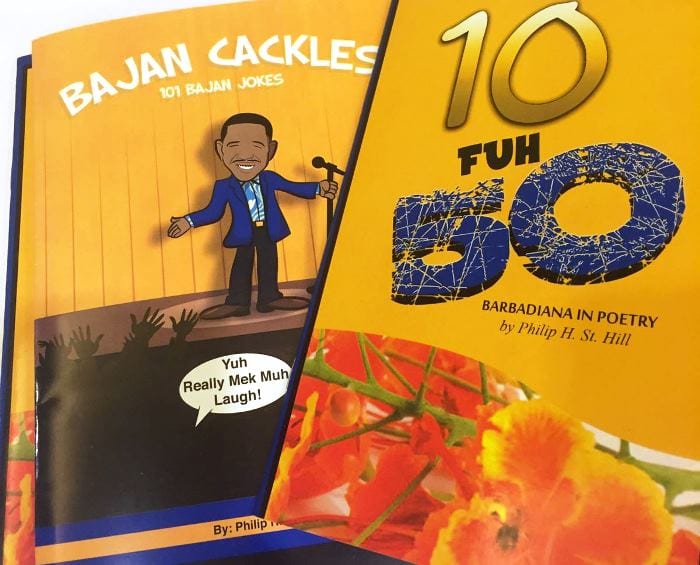 Chief of Protocol in the Ministry of Foreign Affairs, Philip St. Hill, has launched two publications as his gift to Barbadians at home and abroad to mark this country’s 50th Anniversary of Independence.

The books, entitled: “10 Fuh 50” and “Bajan Cackles – 101 Bajan Jokes”, were launched recently during a ceremony at the Hilton Barbados Resort.

The publication “10 Fuh 50” is a compilation of some of his best material over the years in the form of poetry, while “Bajan Cackles – 101 Bajan Jokes” offers the author’s take on Barbadian life and situations.

During his address, Mr. St. Hill explained that both books were an expression of his love for his country, and were intended to make his “own artistic mark on Barbados’ 50th Anniversary of Independence”.

“What I tried to do with the first [book] called “10 Fuh 50” …every year I write a poem regarding Independence, particularly when I was posted overseas. I took the poems that are Independence-related, more particularly, Barbados-related, and put them together with a few others and decided to choose ten for this occasion.

“With [“Bajan Cackles”] …I have ‘Bajanised’ every [joke]. Several of them are my own creations and others are some I’ve heard over the years and I have ‘Bajanised’ them by using Bajan characters and family members, so that when you read them you will be able to identify with them,” he explained.

The Chief of Protocol said he especially wanted the books to reach the Barbadian diaspora to help connect second and third generations to Barbados.

“One of the threats we have to our diaspora is that, as it ages. Unless we have the younger ones coming on, pretty soon we wouldn’t have a diaspora and we don’t want that to happen,” he emphasised.

Also in attendance at the book launch was Deputy Chairperson of the 50th Anniversary of Independence Celebrations Organising Committee, Senator Dr. Esther Byer Suckoo. She pointed out that public servants with talents such as Mr. St. Hill’s only helped to enrich the civil service.

“I think that you have taken advantage of a very opportune moment in the history of Barbados. I know that your writings have something to contribute to Barbadian literature if your performances are anything to go by.

“Thank you for not hiding your light under a bushel but in spite of all the pressure that we continue to put on you, particularly this year, that you have produced these books for Barbadian enjoyment,” Senator Byer Suckoo stated, adding that she could not wait to add them to her reading list.

Both publications may be ordered by emailing Philip St. Hill at islevibes@yahoo.com.