Child Protection A Priority For Government 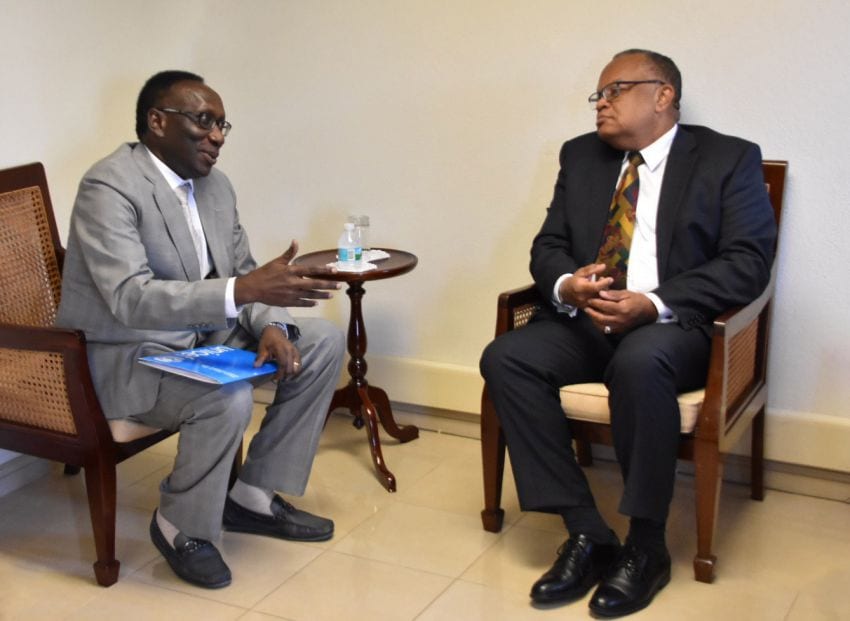 Children’s rights were the focus of a recent discussion between Minister of Foreign Affairs and Foreign Trade, Senator Dr. Jerome Walcott and UNICEF Representative to Barbados and the Eastern Caribbean, Dr. Aloys Kamuragiye. (C.Pitt/BGIS)

The protection of children and their human rights is a priority for the Barbados Government.

Minister of Foreign Affairs and Foreign Trade, Senator Dr. Jerome Walcott, made this assertion recently during a courtesy call by UNICEF’s Representative to Barbados and the Eastern Caribbean, Dr. Aloys Kamuragiye, at the Ministry on Culloden Road, St. Michael.

Senator Walcott said Government was committed to stamping out violence in schools and praised UNICEF for supporting the Ministry of Education’s ongoing anti-violence campaign: Peace Begins with Me, Talk It Out, Violence Solves Nothing.

He emphasized that great importance is given to the rights of the child and pointed out that Faith Marshall-Harris of Barbados had secured a seat on the Committee on the Rights of the Child (CRC) for the term 2019 to 2023.

The Minister also expressed concern about the worrying rise in childhood obesity in Barbados and the wider Caribbean and articulated the need for technical assistance in this area.

In acknowledging the issue of childhood obesity, Dr. Kamuragiye noted it was one of the major causes of chronic diseases.

He said Barbados and the Eastern Caribbean were “doing well” compared to other regions in the areas of child mortality and access to universal primary education. However, he encouraged continued improvement in these and other areas.

Other matters discussed during the courtesy call were sexual abuse, corporal punishment and cyber bullying.