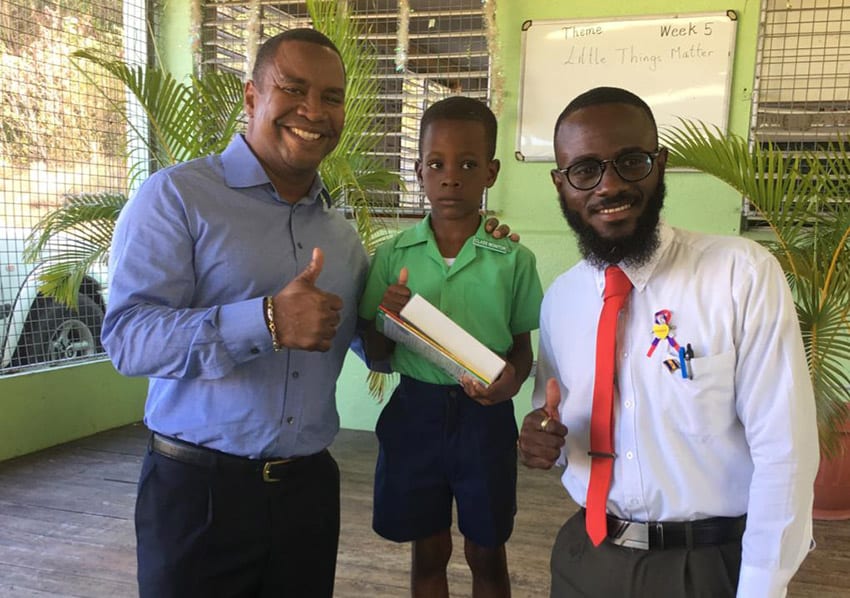 Addressing the morning assembly at Good Shepherd Primary, Fitts Village, St. James today, Minister Abrahams encouraged the pupils to enter every competition they could, whether the subject matter was on energy, agriculture, water or tourism.

He reminded them that not every time they entered a competition they would win, but by participating they would learn and it would build self-confidence.

Mr. Abrahams also told the students that their vision for Barbados’ future is what would help drive new inventions and help to achieve our sustainable development goals. “Keep dreaming and keep dreaming big; it is only by dreaming big that you are going to achieve great things,” Mr. Abrahams said, as he sought to inspire the children of Good Shepherd Primary.

Mr. Abrahams also spoke of Barbados’ goal of becoming 100 per cent carbon neutral by 2030 – an effort to reduce our use of fossil fuels and to provide a clean and quiet environment for our children to grow up in.

“What you know now is only the start of your possibilities… all of you have a chance to try to make Barbados better,” Mr. Abrahams stated.

He also encouraged the pupils to make Barbados a better place by not littering, wasting electricity or water.  “It is up to you young people to actually control the way adults think, and you can encourage everybody around you to practise these habits,” he said.

His former teacher Troy Herbert and Principal of the school Wilma McClean, stated that Blake is very disciplined, behaves very well and is quiet.

Acting Chief Geologist, Jamal Gill, who was also present, said that the Ministry is well aware that primary and secondary school students are the future of Barbados and would be responsible for bringing Barbados into the renewable energy age.  “An age where the Ministry is seeking to provide a better energy sector and a clean environment for our kids to grow in,” he stated.