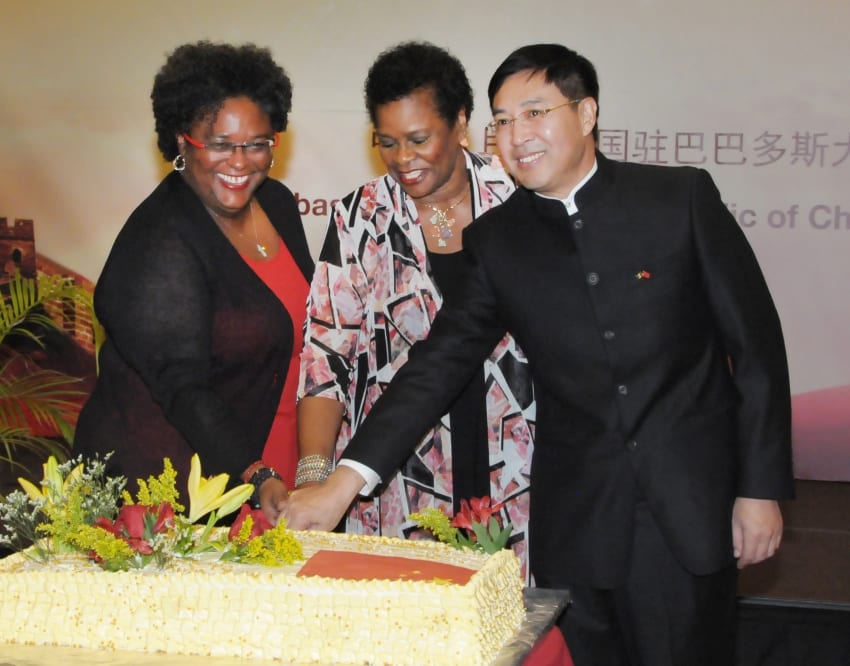 Prime Minister Mia Amor Mottley; Governor General Dame Sandra Mason; and China’s Ambassador to Barbados, Yan Xiusheng, cutting the cake during a ceremony to celebrate the 69th anniversary of the founding of the People’s Republic of China at the Hilton Resort yesterday evening. (B.Hinds/BGIS)

Children in primary and secondary schools in Barbados could be learning Mandarin in their classrooms in the future.

Prime Minister Mia Amor Mottley hinted at this Wednesday night when she addressed a reception to celebrate the 69th Anniversary of the Founding of the People’s Republic of China, at Hilton Resort, Needham’s Point, St. Michael.

Ms. Mottley told the audience that her Government had set itself some very simple objectives by 2030, and expressed the view that each Barbadian under the age of 18 should be given an opportunity to be bilingual.

“While we recognise that English and Spanish are the two languages spoken predominantly in our hemisphere, we recognise that it is impossible to live in this world today without having a level of proficiency in Mandarin.

“We have already seen a number of Barbadian students study in China and the establishment of the Confucius Centre here is an indication that we need to be able to expand both the knowledge of the language, the…history and mores of the Chinese culture.  We, however, want to carry it to the next level and by having that simple goal in 2030, it means that we need to start introducing the teaching of Mandarin in our schools at the primary and secondary level,” she stated.

The Prime Minister said Barbados was yet to reach a Memorandum of Understanding with the Chinese Government on its five-year-old Belt and Road Initiative, which is a development strategy.

“I look forward to the Ministry of Foreign Affairs concluding such a Memorandum of Understanding as a matter of urgency, so that there could be clarity of purpose as to what else we can achieve between our two Governments with respect to this monumental development mission of a global nature,” she added. 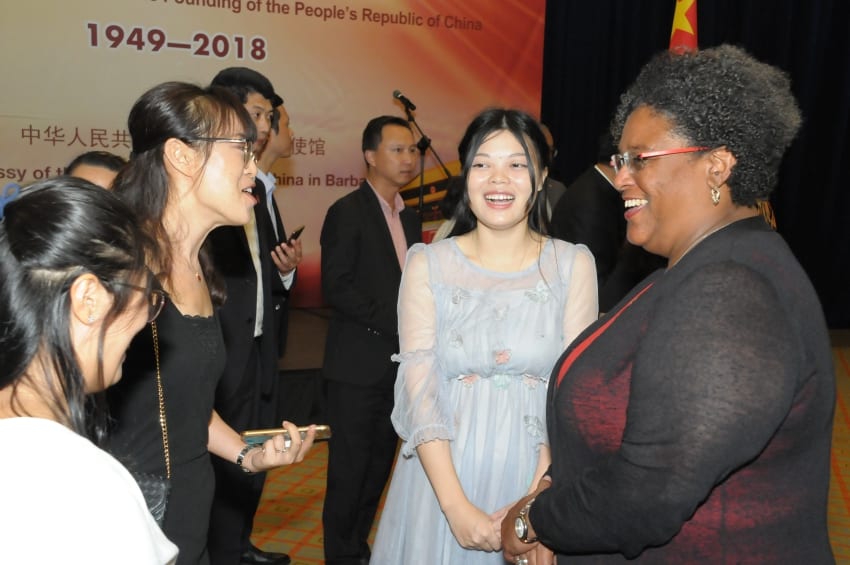 Prime Minister Mia Amor Mottley, chatting with guests at the ceremony for the 69th anniversary of the founding of the People’s Republic of China at Hilton Resort yesterday. (B.Hinds/BGIS)

Ms. Mottley said Barbados and China shared a very important and special relationship, and stressed that even though both countries were vastly different in size, they were bound together in a common fight.

According to her, that fight was for the development of their people, the preservation of the global environment and the improvement of the quality of life for citizens, among others.

The Prime Minister thanked China for its continuous assistance, and highlighted some of the areas of support, including the project at the Queen Elizabeth Hospital involving Chinese doctors.

Chinese Ambassador Yan Xiusheng said both countries had remained friends and close partners since diplomatic relations were established 41 years ago. He disclosed that the Chinese Government had provided BDS$103 million in aid, which helped to construct the Cheapside Market and the Garfield Sobers Gymnasium.

Mr. Yan continued: “As the largest developing country, China is committed to providing assistance to the other developing countries within its capacity, under the South-South Cooperation framework.

“China’s aid, including those to the Caribbean and Latin American countries, is never attached with any political strings, and China stands ready to gradually increase and innovate its aid, by putting priorities in areas such as human resource, infrastructure, agriculture, food security, climate change, etc., so as to better facilitate the social and economic development of the recipient countries.”