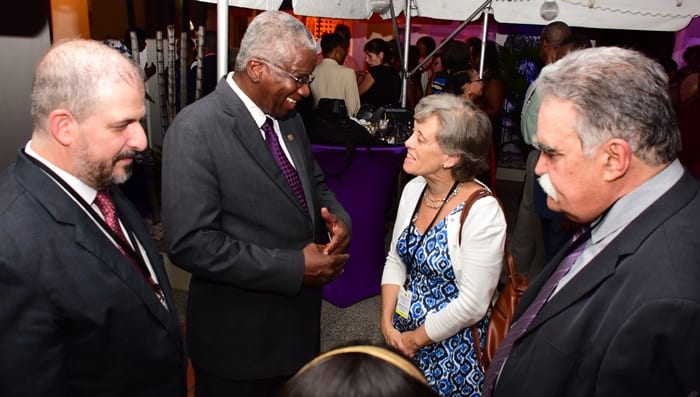 Government will continue to support global conventions that promote the rights of children.

Prime Minister Freundel Stuart gave this commitment recently when he addressed a reception at Ilaro Court for delegates attending the 92nd Regular Meeting of the Directing Council of the Inter-American Children’s Institute.

Mr. Stuart told his audience: “I want to assure all of you that the Government of Barbados is committed to ensuring that whatever conventions, treaties, understandings there may be, relevant to this hemisphere and relevant globally, that require the adoption and eventually the signature of Barbados, can be sure to be executed by us because our commitment to the welfare of our children is irrevocable and is profound.”

The Prime Minister noted that in some parts of the world, children were not able to enjoy their childhood and tomorrow, for them, was a very distant prospect because of all the perils confronting them in their environment.

He added that education, health care and embracing their parents were luxuries for those children. “So, it is a mark of our civilisation in this part of the world that we allow our children to be children, to enjoy their childhood. We [also] take conscious steps to protect their rights and to ensure that the machinery of our justice systems is so well lubricated that when injustices are meted out to our children, resort to the courts of law can be had easily and that justice can be dispensed in a way that ensures that their faith in the future is not undermined,” he stated.

Mr. Stuart stressed that children also experienced the gamut of emotions similar to adults and proffered the view that the same kind of attention must be paid to the rights of both groups.