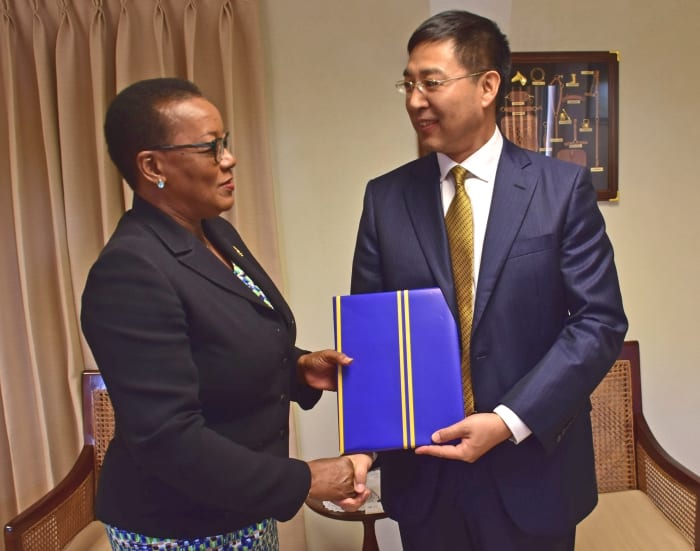 China’s Ambassador to Barbados, Yan Xiusheng, warmly greeting Minister of Foreign Affairs and Foreign Trade, Senator Maxine McClean as she presents him with a token. (C.Pitt/BGIS)

Chinese Ambassador, Yan Xiusheng, has praised Barbados for its observance of the One China Policy over the last four decades, which have seen relations between the two countries develop.

He made mention of this while pointing to the successes of the existing relationship during a courtesy call on Minister of Foreign Affairs and Foreign Trade, Senator Maxine McClean, recently.

In fact, the Ambassador expressed delight that two medical teams from China had arrived in Barbados to assist with providing medical care at the Queen Elizabeth Hospital. He praised the medical team and described the working relations with the Barbados team as “excellent”.

The Ambassador also extended an invitation to a delegation from Barbados to attend the Shanghai Expo later in the year.

In turn, Senator McClean pointed to the long-standing relationship between Bridgetown and Beijing. She said the Ambassador’s arrival comes at an exciting time.

“It is a period that I have seen the unfolding of what constitutes the deepening of the relationship.  We have had significant success so I anticipate that your tour of duty here will be a good one,” she said.

The two officials also discussed the finalisation of an Air Services Agreement; climate change and its impact on vulnerable countries; and renewable energy.