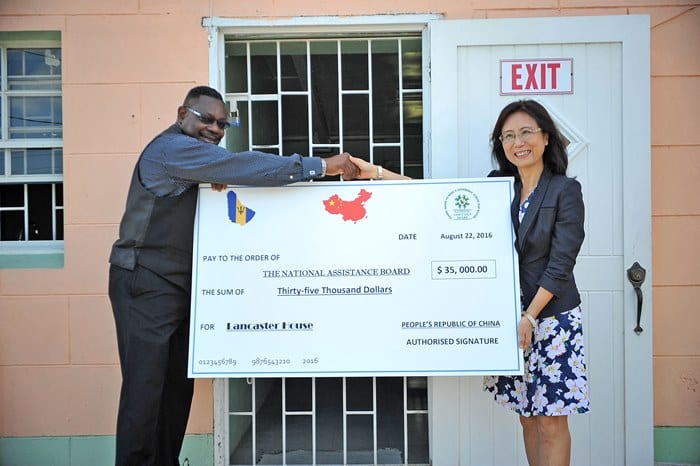 The National Assistance Board (NAB) has received a $35,000 grant from the Embassy of the People’s Republic of China, to assist with much-needed structural repairs to Lancaster House.

Lancaster House, which has been operated by the National Assistance Board since August 2015, is designed to provide temporary accommodation to the elderly, as well as persons who have been dislocated as a result of fire, floods and other disasters.

Ambassador Wang explained that when she met with Mr. Blackett earlier this year, he briefed her on the development of social care and welfare services in Barbados, as well as on the functions of the NAB.

“I also got to know that Lancaster House, which provides temporary accommodation for homeless people, among them senior persons in particular, due to the disasters, was in need of remedial works, and showing our goodwill of lending a helping hand, I expressed the willingness that the Chinese Embassy could make its contribution. Today, this comes through the donation of $35,000 from the Embassy, and the refurbishments project of the Lancaster house can be fully financed,” she stated.

While extending his thanks to the People’s Republic of China, Mr. Blackett assured Ambassador Wang that the donation would be instrumental in the structural upgrade to the facility as it was only possible to house one family this past year.

“While Lancaster House has the capacity to accommodate a maximum of three families, given the outstanding upgrades which were needed to the structure over the past year, only one family could have been housed at any given time.

“Today’s presentation is therefore timely, as it will allow for the structural work here to be advanced. This donation, and the outcome which will be achieved, demonstrate how our services can be developed through our collective efforts and resources, and the establishment of partnerships between organisations and external donors, like our friends from the People’s Republic of China,” he said.