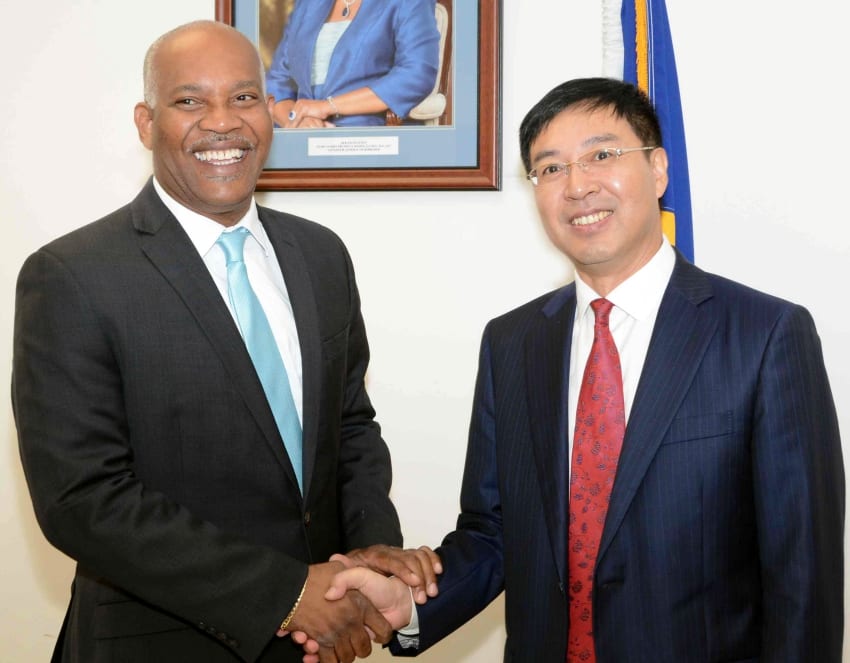 The rule of law was a major talking point when Ambassador of the Republic of China to Barbados, Yan Xiusheng, recently paid a courtesy call on Attorney General and Minister of Legal Affairs, Dale Marshall, at his Wildey, St. Michael office.

Ambassador Yan congratulated the Attorney General and the new Government on their assignment and noted that Barbados’ interest in “putting people first” coincided with China’s promise to be people centred and serve “its people with heart and soul”.

Lauding the long standing relations between the two countries, he said it had always been marked by friendly cooperation, since the establishment of diplomatic ties in 1977.

Ambassador Yan acknowledged that China looked forward to enhancing the established cooperation, with both countries valuing the rule of law and making great efforts to fight corruption.

He said that the Chinese government was focused on advancing law-based governance in all areas and was seeking to develop a country that was based on the rule of law.

“Our two countries attach importance to the rule of law and we have maintained good cooperation in law enforcement. The Chinese Government, together with your Office, the Office of Home Affairs, the Office of the Director of Public Prosecutions and the Police Department, have a longstanding cooperation we hope to maintain,” he said, adding that China was going all out to deal with corruption and build a clean Government.

Assuring the Attorney General his country would also support Barbados in capacity building for judicial and law enforcement departments, he commended the island’s efforts with the Integrity in Public Life Bill 2018, and noted it would help to provide momentum for China-Barbados cooperation in anti-corruption and law enforcement.

Attorney General Marshall, in welcoming the Ambassador’s comments on the rule of law, said: “Developing countries are often perceived in the international arena as not following the rule of law, and Barbados and generally the countries of the Caribbean have been a bit of a departure from that mindset, and the rule of law has underscored every effort of our development.”

While noting that issues of corruption, money laundering, terrorist financing had all reached us, he stressed: “We recognise that as a nation state we have a responsibility to play our part against money laundering and in anti-terrorism financing, and we are certainly trying to build our capacity in that regard…. When you find money laundering, corruption is very closely connected to that because it is through money laundering that the proceeds of the corrupt activity generally get moved.”

Thanking China for its continued commitment to Barbados, Mr. Marshall further noted that through that country’s support for conferences, the Caribbean was able to come together and strengthen cooperative regimes, in a joint way, to address the issues of corruption.