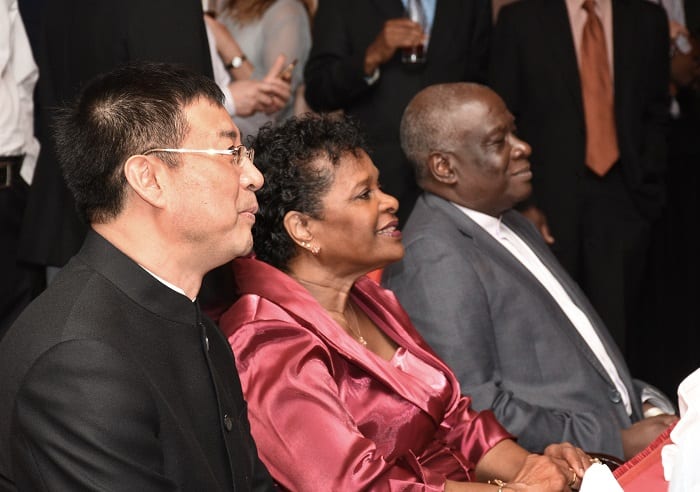 Chinese Ambassador Yan Xiusheng, has showered praises on successive Barbados governments for their observance of the One China Policy, while pointing to the myriad achievements to date of the bilateral partnership.

He heaped accolades recently on the longstanding relations spanning four decades during a welcome reception and celebration in honour of the Chinese New Year at Accra Beach Resort and Spa.

The Ambassador told the audience, which included Governor-General, Dame Sandra Mason; Chief Justice, Sir Marston Gibson; representatives of Government, Embassy staff and other well-wishers, that relations between the two countries have always been stable. He said he was also encouraged by the enthusiasm and high expectation of China-Barbados relations shown by Barbadians “of all walks of life”.

“Our mutual trust has deepened cooperation in such areas as the economy, culture, education and health care.  Additionally, people-to-people exchanges have been enhanced and sound coordination in the global arena, including climate change and sustainable development have been maintained,” Ambassador Yan underlined.

The diplomat also gave a snapshot of the bilateral achievements in 2017. “Last year, the China Barbados Visa Waiver Agreement came into effect; the Sam Lords Castle Hotel project officially commenced; the Sir Garfield Sobers Gymnasium was rehabilitated with China’s aid and handed over to the Government of Barbados.

“More than 2,500 persons registered for the Chinese Language course at the Confucius Institute at U.W.I. Cave Hill Campus, and Barbados pioneered in the region by introducing Chinese as a secondary school foreign language to their curriculum,” he listed.

Ambassador Yan also disclosed that two Chinese medical teams stationed at the Queen Elizabeth Hospital successfully performed some 150 surgeries and offered medical services to over 1,200 patients. In the area of agriculture, the Chinese Government funded two agricultural projects which, according to him, had made steady progress.

Meanwhile, Minister of Foreign Affairs and Foreign Trade, Senator Maxine McClean, noted that economic cooperation between Barbados and China has continued to expand. She said there was also an improvement in cultural, scientific and educational ties and enriched people-to-people contacts that have benefited both countries.

“In 2017, Barbados and the People’s Republic of China celebrated the 40th anniversary of the establishment of diplomatic relations. It was a momentous achievement in our relationship.  Over the four decades of engagement, the areas of cooperation between Barbados and China have grown dramatically,” she stated.

Like Ambassador Yan, Senator McClean also mentioned the positive results of the bilateral relationship, including the provision of Chinese grant funding for the Hope Agricultural Training Institute and the project for the Barbados Centre of Food Security and Entrepreneurship.

She thanked the staff of the Embassy of the People’s Republic of China for their continued hard work in improving the bilateral relationship and pledged her Ministry’s continued support and cooperation.