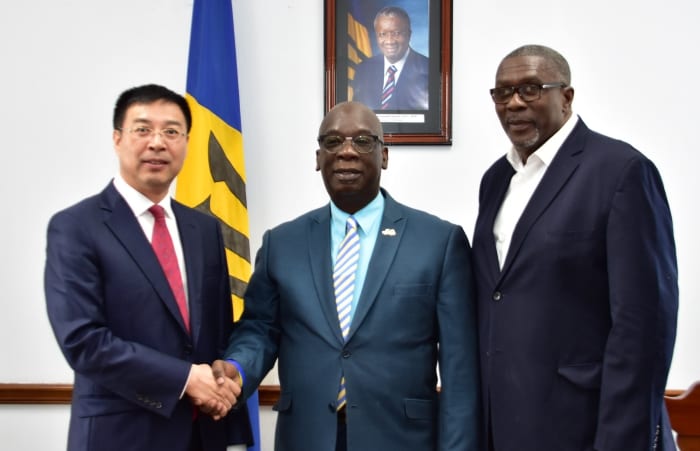 The Ministry of Education and the University of the West Indies’ Confucius Institute at Cave Hill, have come in for high praise from new Chinese Ambassador to Barbados, Yan Xiusheng.

Mr. Yan, who paid a visit to Minister of Education, Science, Technology and Innovation, Ronald Jones, on Wednesday, at the Ministry’s headquarters, said he was impressed with the speed with which the Chinese language of Mandarin had caught on in Barbados.

He said there were currently 2,500 students at the Confucius Institute studying Mandarin and it was being taught by Chinese teachers at four schools on the island – primary and secondary – as part of a pilot project.

The Ambassador added that the teaching of Mandarin in Barbados had developed “very fast” and, presently, Barbados was the first experimental country in the Caribbean to have Chinese teachers.

The Education Minister also expressed his gratitude for the 14,000 pieces of technology, including tablets, laptops and desktops that were supplied by the Chinese Government in 2017 for use in primary schools, adding that they came in quite handy across the educational system. He said pupils could see it as a “tangible demonstration of the relationship between the People’s Republic of China and Barbados”.

In addition, Mr. Jones told the Ambassador that he was excited about the University of the West Indies, Cave Hill Campus’ Food Security and Safety Project at Dukes, St. Thomas – another venture on which Barbados and China would be collaborating.

It is expected to provide a wide range of accredited training to meet the future needs of Barbados and the Organisation of Eastern Caribbean States in the field of agribusiness entrepreneurship. This, Mr. Jones explained, could cut down significantly on Barbados’ high food import bill.

Ambassador Yan Xiusheng, who called Barbados “a very good friend of China”, thanked Government for supporting the development of diplomatic relations between the two countries, particularly in the area of education.

He stated that both countries had enjoyed a mutual trust and carried out many exchanges in the areas of education, medicine and culture, and co-operated on the issue of climate change. “During my tenure, I will try my utmost to promote this relationship to a higher level,” the Ambassador remarked.