The Top Male Student was Neil Miguel Charles of St. Cyprian’s Boys’ School, who received 98 in English and 99 in Maths, for an overall score of 241.35, with an ‘A’ in the Composition. He will be attending Queen’s College come September.

Zahzara Sikudhani Barrow of Christ Church Girls’ School was this year’s Top Female Student. She scored 96 in English and 99 in Maths, for a total score of 239.87 and an ‘A’ in the Composition. She will also attend Queen’s College at the start of the new school year.

The results were announced this morning during a press briefing held by Minister of Education, Technological and Vocational Training, Santia Bradshaw, at the Ministry’s Constitution Road, St. Michael headquarters. 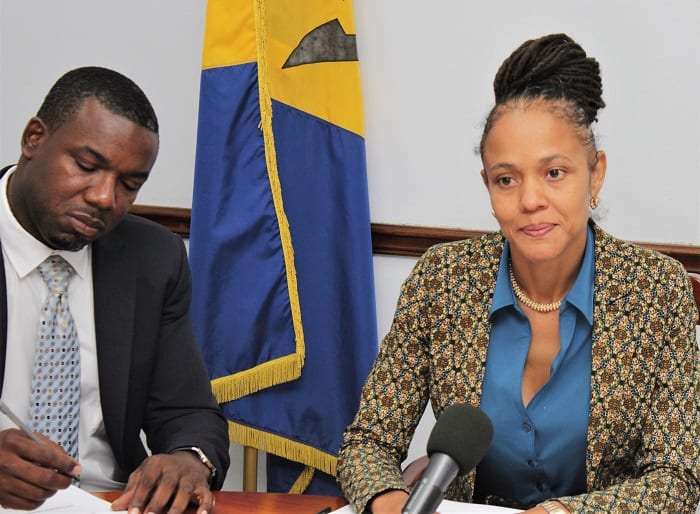 Minister of Education, Technological and Vocational Training, Santia Bradshaw, and Parliamentary Secretary in the Ministry of Education, Dr. Romel Springer at today’s press briefing to announce the results of the Barbados Secondary Schools’ Entrance Examination. (M.Elcock/BGIS)

This year ten students, seven males and three females, scored full marks – 100 per cent – on the Mathematics paper. There has been a marginal decrease in the number of students scoring full marks when compared to 13 students in 2017.

Additionally, there were 12 early sitters whose scores placed them at schools such as Harrison College; Queen’s College; Christ Church Foundation School; The Lester Vaughn School; The St. Michael School and Alexandra School.

Ms. Bradshaw explained that the national mean this year was 69.44, compared to 70.4 in 2017. However, she added that the overall performance in Mathematics had shown “significant” improvement, with an increase in the performance of both males and females over the period 2016 to 2018.

However, while there has been an improvement in the students’ overall performance in Mathematics, the Education Minister pointed out that there was no significant improvement in the number of schools, both public and private, which performed above the national mean.

“What the results do reveal, however, is that there is a core of schools that are consistently in the top 25 performing schools and there is also a corresponding group of schools that perform the complete opposite. Since taking this office, this matter has been engaging my urgent attention with the Ministry’s staff and it has become an agenda item which I have made a high priority,” she emphasised.

The Education Minister said the 47 students who were granted exemptions this year have been allocated to institutions which cater to their needs, namely, The Ann Hill School, The Special Units at Erdiston, Ellerton Primary, All Saints Primary, Eagle Hall Primary, Charles F. Broome Memorial Primary and Derrick Smith.

Ms. Bradshaw lamented the fact that each year, there were a number of students who were not allocated, in the initial stage, primarily because parents made too few choices of their schools.  She explained that when this occurred, the students were placed at a significant disadvantage because they were then allocated to one of the few schools where spaces were available.

The Minister said her Ministry would be tackling this problem by utilising technology to reach parents who may not be inclined to access the information in the Common Entrance booklet, which acts as a guide to government secondary schools.