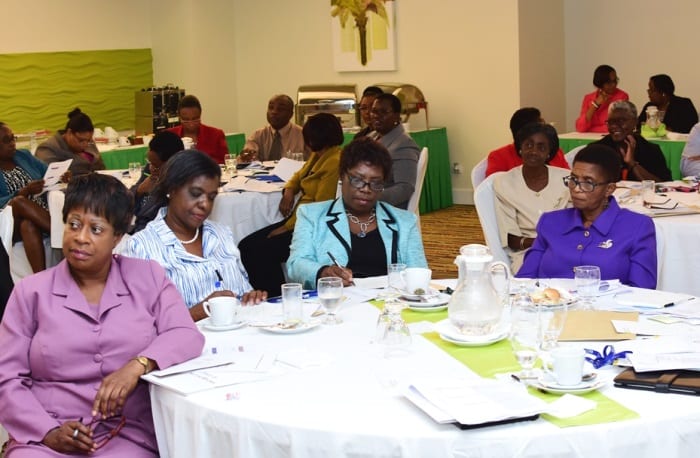 Some of the senior public servants at the meeting on the draft Charter for Caribbean Public Services at the Radisson Aquatica. (C.Pitt/BGIS)

Senior public servants got the opportunity to robustly discuss and share their views on the draft Charter for Caribbean Public Services at a meeting on Thursday, organised by the Office of Public Sector Reform (OPSR).

The near three-hour meeting, held at Radisson Aquatica, was attended by 50 Permanent Secretaries, Heads of Departments, members of the private sector, trade unions and non-governmental organisations.

The discussions were led by Assistant Director of Corporate Services at the Caribbean Centre for Development Administration (CARICAD), Andre Griffith.

During a brief opening ceremony, Director of OPSR, Charley Browne, described the Charter as an initiative that sought to identify critical components for professional and effective public services across the region.

“It establishes a general framework of guiding principles, policies and management mechanisms, reflecting a common commitment of the public services of the Caribbean region. It is intended to serve as a catalyst for the reform, modernisation and transformation of national public sector entities within the context of the country’s realities and priorities,” Mr. Browne explained.

He pointed out that the Charter discussed a number of areas, including accountability, fairness and equity, service delivery, openness and transparency, competence and capacity, as well as innovation and continual improvement.

He added that if successfully implemented, the Charter would provide a framework for a harmonised approach to public sector modernisation and transformation across the Caribbean. “This means in its simplest form that citizens accessing services in one island can expect and receive the same level of service in another,” he noted.

Mr. Browne expressed the view that in this year where productivity is the focus in Barbados, and Caribbean islands were dealing with various challenges, the Charter could be the instrument for meaningful transformation in this region.

Permanent Secretary in the Ministry of Civil Service, Alyson Forte, underscored the importance of the stakeholders also participating in the discussions.

“This Charter is not only for us as public servants to be able to step up and do a good job, but we want to be able to get the opinions of you, our stakeholders as to where we can serve you better. Indeed, we have been seeking to do that in many ways,” Mr. Forte stated.

He noted that public servants received “a lot of lashes for their performance” and they do not always get a lot of praise when they go beyond their work day to meet deadlines, to keep the engines of Government running.

He gave the assurance that public servants would continue to do their best, adding that the public service provides the tracks on which the economy runs.

Emphasising the importance of the Charter, Mr. Griffith said effective institutions were indispensable for social and economic development so the public service needed to continuously improve what it was doing in search of effectiveness. He added that Caribbean countries could learn a lot from each other and suggested that having a common Charter would facilitate such.

Work on the Charter started in 2015. A draft was completed in February 2016 and a number of consultations have been held to garner comments on the document.

Mr. Griffith explained: “Five member states, without our assistance, conducted some consultations and came back to us with some early feedback, which we used to refine the document.

“But we were not satisfied internally that we had heard from as many of our member states, that to our mind would give us comfort in going forward with this as a regional initiative. So, we have a second round of consultations now, where we have been able to secure some resources to actually go in and lead some of the consultations and this is one of about five or six.”

He disclosed that the next step would be to seek to secure ministerial level endorsement at a meeting early next month and support later from the CARICOM Heads of Government.

CARICAD is executing this project under a Memorandum of Understanding with the CARICOM Secretariat, and the beneficiaries will be the 20 members and associate members of CARICOM.