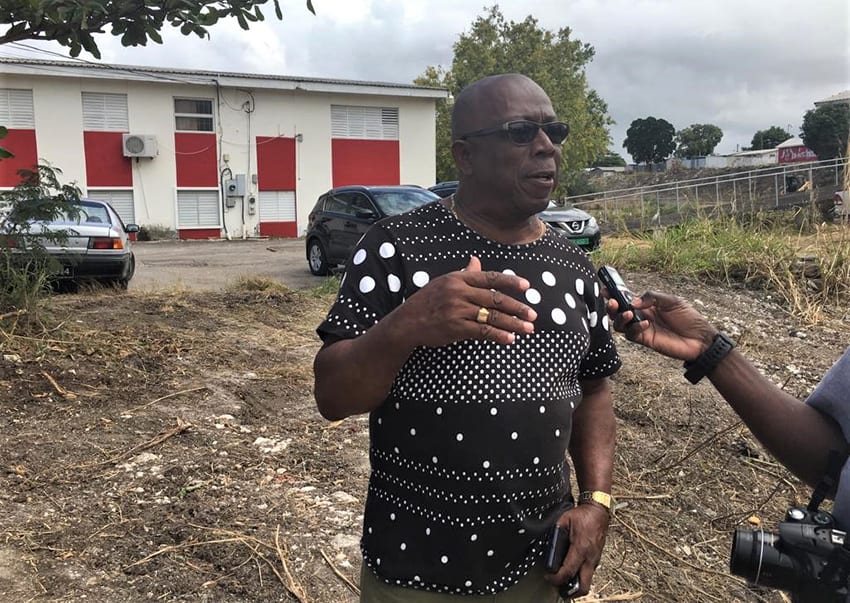 Minister of Environment and National Beautification, Trevor Prescod speaking to the media during the cleanup of the environs of the Ann Hill, Irving Wilson, and Wilkie Cumberbatch Primary Schools on Saturday. (S.Forde/BGIS)

Over the last week, the Ann Hill School remained closed so that a cleanup of its environs could take place.

And, most of the activity was completed on Saturday, with work being carried out on the environs of the school at Pine Plantation Road, St. Michael, including Irving Wilson School and Wilkie Cumberbatch Primary.

Minister of Environment and National Beautification, Trevor Prescod, who participated in the cleanup, disclosed that his Ministry had received a report from the Ministry of Education, Technological and Vocational Training about the environmental conditions at the school, and quickly sought to rectify the situation.

“The National Conservation Commission (NCC), which falls under the Ministry of Environment and National Beautification, has been carrying out work on the surrounding environs which includes: Ann Hill School, Irving Wilson School and Wilkie Cumberbatch Primary, and have removed the vast forestation, garbage, galvanise and asbestos sheets found around the schools….

“The NCC employed contractual companies in order to get the job done within time required, and in addition, we brought in people from within the community to assist,” Minister Prescod said.

The work also included the re-opening of blocked suck wells.  The Minister said persons in the community had indicated that whenever heavy rainfall occurred, water from Lascelles Terrace, Princess Royal Avenue and the main road at Collymore Rock would course through the area and settle behind the Ann Hill School, which contributed to flooding.

Mr. Prescod pointed out that the Education Ministry did not have a maintenance programme capable of doing such large scale work, and stated: “I am going to have a conversation with the Prime Minister, the Minister of Education and all the relevant authorities and propose that NCC centralizes its operations in a meaningful way to assist with the maintenance around the island’s schools….

“It is just a proposal, but I will make it shortly to the Prime Minister and explain the rationale for NCC taking on such a responsibility.”

Minister Prescod added that the proposal would include “a continuous work plan so that the environs here will never be like this again”; a regrading of the land, where the whole topography would be rearranged and kept well manicured; decorating the walls with artwork; and the planting of trees.