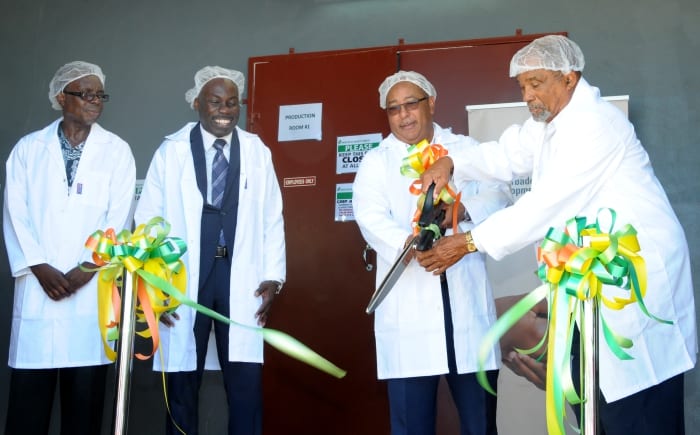 Minister of Agriculture, Dr. David Estwick and Chairman of the BADMC’s Board of Directors, Orlando Marville (right) cut the ribbon to officially open the BADMC’s Pack House facility while CEO of the BADMC, Shawn Tudor and Director of UWI’s Centre For Food Security and Entrepreneurship, Cave Hill Campus, Professor Leonard O’Garro (left) look on. (B.Hinds/BGIS)

Agricultural and tourism officials anticipate a strengthening of the relationship between the two sectors, with the establishment of Barbados Agricultural Development and Marketing Corporation’s (BADMC) Pack House and electronic initiatives.

The facility, located at BADMC’s Fairy Valley, Christ Church headquarters, was designed to ensure locally grown fruits and vegetables are of high quality.  It also allows for direct interaction between the farmers and their clients, or potential clients through the internet-based buyers and sellers forum called the Agricultural Trading Commodities Platform, as well as a marketing information system.

Addressing the Corporation’s recent launch of its Crop Value Chain of Services, Divisional Head of Agricultural Services, Paul Waithe, revealed that they had already started a project involving 85 farmers and the tourism sector.

“We have engagement with the Barbados Hotel and Tourism Association. I believe there are 15 hotels that have participated in a pilot project to engage the local farming community, in terms of production and we are very happy to engage them,” he said.

According to him, they are in the process of negotiating contracts, so they can set a production schedule with the farming community. Agricultural officials are also eyeing the prospect of supplying cruise lines homeporting in Barbados.  Mr. Waithe disclosed that they are in discussions with a cruise line, but did not go into detail.

“We are going to establish a traceability protocol. Traceability is critical because it allows us to engage markets, export ultimately, but particularly markets in the cruise sector. I believe we have a standing order with some suppliers to the cruise ship,” he stated.

Also delivering remarks at BADMC’s Crop Value Chain Services’ launch was Chief Executive Officer (CEO) of the Barbados Tourism Product Authority (BTPA), Dr. Kerry Hall.  As she welcomed the development, she called on the agricultural sector to increase its visibility, adding that it could no longer be Barbados’ “best kept secret”.

Noting that the island’s culinary offerings are a key element of the overall tourism product and visitor experience, Dr. Hall encouraged agricultural officials and stakeholders to develop a marketing strategy, to make people more aware of the locally produced food items, such as BADMC’s Carmeta line, which features cassava cake mixes, gluten free meat products and a cassava sorbet.

She suggested that the strategy should include having sampling sessions, not only at hotels and restaurants, but at other establishments. The BTPA CEO also assured those in attendance that the tourism sector would support efforts to make this a reality.